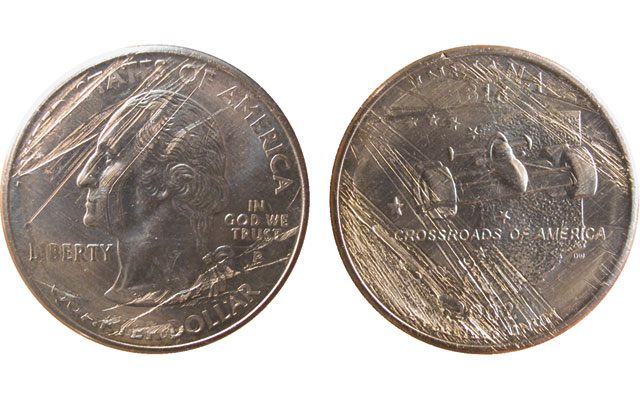 Both faces of this 2002-P Indiana quarter dollar are covered with heavy scratches that were inflicted before the strike. A depressed semicircle on the left side represents a second type of pre-strike damage. All photographs by Mike Diamond. 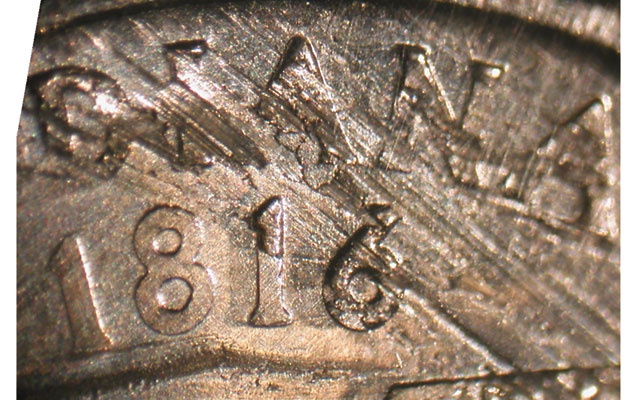 Deep, closely spaced scratches in the northeast quadrant of the reverse face of the Indiana quarter dollar were partially closed up by the strike. 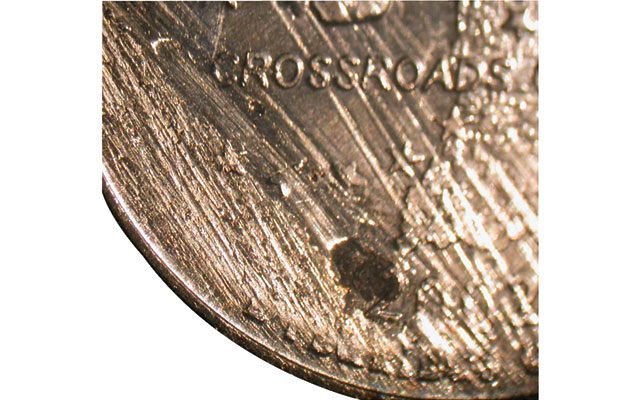 A particularly wide die scratch in the southwest quadrant of the reverse face of the quarter dollar terminates at one end in an embedded piece of black debris.

The Dec. 14, 2009, Collectors’ Clearinghouse summarized every known mechanism or entry point by which foreign matter ends up in a coin. Foreign matter can be (1) poured into, or left behind inside, a crucible; (2) dropped into a molten ingot; (3) rolled into the coin metal strip; (4) pushed into a blank by the blanking die; (5) squeezed into a planchet by the upset mill; or (6) struck into a coin by the dies.

Last year a talented young collector named Alex Ness discovered a new entry point in a heavily damaged 2002-P Indiana quarter dollar housed in an Uncirculated Mint set. Covered in scratches, the coin attracted little buyer attention when it appeared on eBay. That’s undoubtedly because everyone else assumed it was a case of post-strike Mint damage. It’s not uncommon to find coins that have been badly damaged in Mint machinery after emerging from the striking chamber. Some can be found in Uncirculated Mint sets, where they’re most often damaged by the crimping machine that seals each coin in its plastic pocket.

It seemed reasonable to dismiss the damage as having occurred after the strike because the scratches and gouges are just as strong in the field as on the design. Ordinarily, damage is less evident in the field because the increased effective striking pressure in this area smooths out and often erases the imperfections. However, close inspection showed the damage occurred before the strike.

In his recent Errorscope article (November/December 2014), Ness observed that there is no displaced metal flanking the scratches and gouges. The pressure ridges and burrs that must have originally been present were flattened by the strike. Furthermore, some of the scratches in the northeast quadrant of the reverse face were “closed up” by the strike when the displaced metal was folded back over the open incisions.

It’s not clear what caused the damage or whether it occurred before or after upset. The design rim is less affected than the coin’s interior, which is odd since the perimeter of a blank has no special protection and the proto-rim of a planchet is especially vulnerable to damage. Furthermore, any damage that coincides with the area eventually occupied by the design rim will tend to persist, since effective striking pressure is relatively low in this area.

To me, the scratches resemble “road rash.” Anyone who’s fallen off a bicycle or a skateboard is familiar with this injury. Any exposed skin that contacts the road surface ends up badly scraped, and one often has to clean out bits of dirt and asphalt from the wound. The similarity to road rash is more than skin deep (excuse the pun) because a particularly wide scratch on the reverse face terminates in an embedded piece of black debris. It’s clear that the foreign object was dragged across the surface of the planchet and came to rest in the reverse copper-nickel clad layer. The effect is reminiscent of the sliding rocks of Racetrack Playa, where stones are moved across a (usually) dry lake bed by collars of ice propelled by the wind. The foreign particle is evidently quite hard, because the design did not strike up where the die contacted it.

This newly discovered mechanism for the introduction of foreign matter needs a name. “Scratched-in debris” or “scraped-in debris” seem the most straightforward terms.

Ness discovered that the edge of his Indiana quarter dollar was also damaged before the strike. Exposure of the copper core is interrupted and uneven in some areas because bits of copper-nickel cladding were scraped up, redeposited, and struck into the edge. The edge damage lines up with some of the heaviest scratches on the reverse face, pointing to a common origin.

Ness identified another form of pre-strike damage, which may or may not be contemporaneous with the scratches and edge damage.

A shallow, vaguely defined, C-shaped depression encompassing approximately 180 arc degrees is seen on the left side of both faces a short distance in from the design rim. Their radius of curvature is smaller than a quarter dollar. Peripheral design elements did not strike up completely in these areas due to the localized reduction in planchet thickness. It’s possible that here the blank or planchet was compressed between two slightly tilted cylinders or tubes.