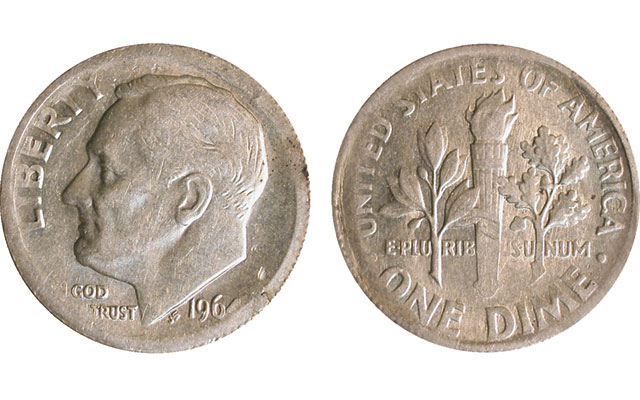 The perimeter of this 1964 Roosevelt dime is poorly struck, especially on the obverse. The peripheral weakness is apparently due to the coin being struck on a blank, rather than a planchet. Images by Mike Diamond. 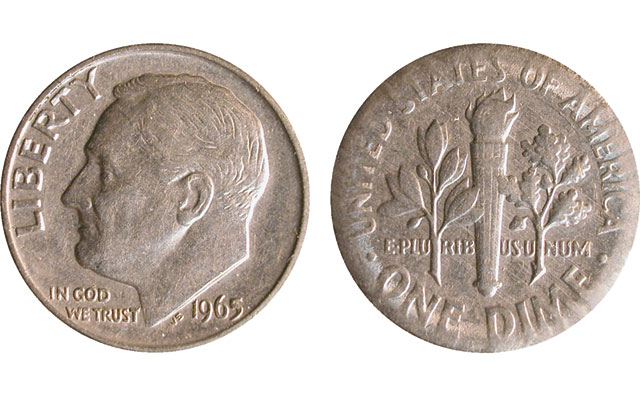 The reverse perimeter of this 1965 Roosevelt dime shows stretched-out, fading letters. The odd appearance is due to mechanical alteration outside the Mint. 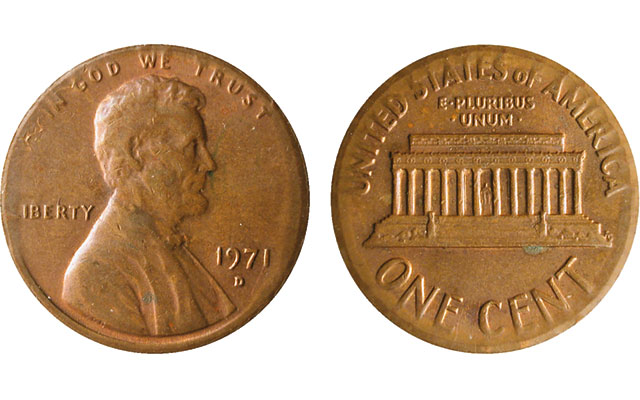 On both faces of this 1971-D Lincoln cent, the periphery was mechanically altered outside the Mint, with the reverse face more seriously affected. Reverse letters fade out and appear elongated as they approach the coin’s edge.

I occasionally encounter essentially normal coins that have a poorly-struck perimeter.

The illustrated 1964 Roosevelt dime provides an example. It was struck fully within the collar and the only evidence of interior weakness is the handle of the torch. It is slightly underweight at 2.41 grams (normal is 2.5 grams), but it is unlikely that, on its own, the slightly thinner planchet would have had any effect on the clarity and completeness of the design.

In this case, the weak-to-absent design rim and the fade out of peripheral letters is likely due to inadequate upset of the planchet or a complete lack of upset (i.e., a blank). The flat, unstruck obverse perimeter is compatible with a blank. The presence of very strong reeding and a sharp, right-angle face/edge junction is also consistent with this explanation as both indicate a tight fit within the collar.

There are other reasons why the periphery of an otherwise normal coin might not strike up properly. The effect may be due to a slightly weak strike, excessive die convexity (a design flaw), or a planchet that is too hard (perhaps as the result of inadequate annealing). Naturally, these factors may occur in combination. For example, a poorly-struck perimeter is pervasive among 1985-D Roosevelt dimes. It appears to stem from a combination of inadequate upset and excessive die convexity (primarily on the obverse die).

These genuine errors are easily confused with innumerable altered coins that have had their perimeter abraded on one or both faces. These coins typically show a sloping perimeter that is either featureless or that carries indistinct letters. The letters fade out as they approach the coin’s edge and often appear stretched out.

A sloping, abraded perimeter can be seen on the reverse face of the illustrated 1965 Roosevelt dime. Apart from the peripheral weakness, the coin is well-struck. The reeding is strong and the obverse face is entirely normal. The peripheral letters on the reverse fade out as they approach the coin’s edge. The outer tips of the mushy letters appear prolonged as they run across the area normally occupied by the design rim.

For a coin struck within the collar, there is no aspect of the strike that can produce stretched-out, mushy letters. Likewise, there’s nothing in the minting process that could produce a sloping perimeter. The perimeter of a blank is flat, while the perimeter of a planchet is raised (the proto-rim).

Another sign of alteration is a slight reduction in weight from the loss of surface metal. The 1965 dime weighs 2.22 grams instead of the normal average of 2.27 grams. While it is true that genuine thin planchet errors often have a weakly-struck perimeter, that perimeter doesn’t slope down and the interior of the coin will also generally show evidence of a weak strike. A final warning sign found in our 1965 dime is the great discrepancy between the strength of the obverse design rim and the absence of the reverse design rim.

Although it’s not true of this example, many other clad coins with abraded perimeters will show a thin copper ring along the outer margin of one or both faces (an exposure of the copper core).

Our second example of a sloping perimeter is less easily flagged as an alteration due to the reduced discrepancy between the two faces. Both faces on this 1971-D Lincoln cent were altered, but the reverse face is much more seriously affected. Like the dime, this cent is underweight (2.94 grams instead of 3.11 grams) and the reverse letters are mushy and stretched out. On the obverse, the L of LIBERTY and the letters IN G are the most seriously impaired design elements.