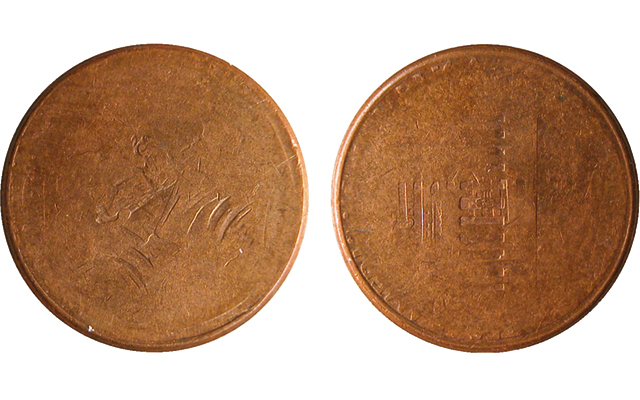 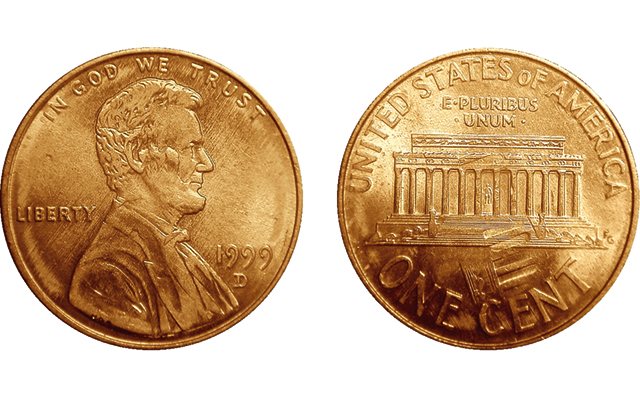 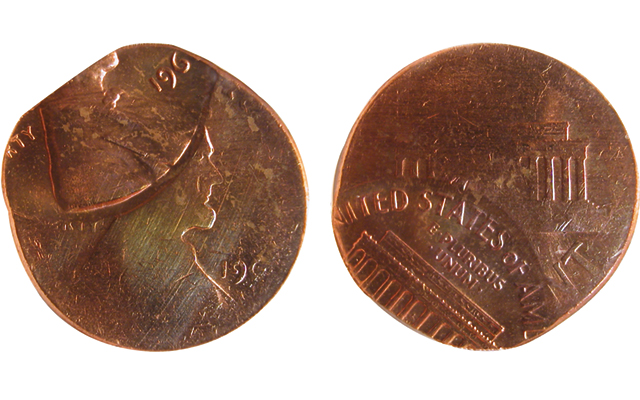 This 196- Lincoln cent received a very weak first strike that was perfectly centered (and presumably in-collar). A second, off-center strike was delivered with normal strength.

Like many error/variety collectors (including me), John Shields likes to gamble on eBay. The exercise involves finding a potentially rare or valuable auction item that has been inaccurately described or so poorly photographed that the nature of the error is hard to discern.

By such means Shields recently acquired a small, seemingly humdrum lot of error coins. But one of the coins — described as an unstruck planchet — looked like it might be of greater interest. Shields noticed a series of curved grooves and a possible profile of Lincoln on the only surface that was photographed. He thought it might be a very weak strike, which would be a fine prize given the paltry sum of money he paid. Once in hand, it proved more interesting than he could have imagined.

The coin turned out to be an in-collar double strike with a 90 degree rotation of the coin between strikes. Both strikes were exceedingly weak. Owing to the lack of details, I cannot determine if both strikes were delivered by the same die pair (although it seems likely).

Strikes this weak have traditionally been called “die adjustment strikes,” “die trials,” and “set-up pieces” in the mistaken belief that these coins are escapees from test runs. But numerous, independent lines of evidence indicate that the vast majority of weak strikes in the marketplace are the result of spontaneous press malfunctions that are often short-lived.

One such error coin — a 2001-D Lincoln cent with an in-collar double strike — was featured in the May 2, 2011, column. The first strike was normal and the second quite weak. Subsequent study of microscopic die flow lines demonstrated that the same die pair was responsible for both strikes.

An even more exaggerated discrepancy in striking pressure is displayed here in a 1999-D cent discovered by Robert (“BJ”) Neff. Here again, the first strike was normal while the second strike was exceptionally weak and rotated about 80 degrees counterclockwise relative to the first strike. On the obverse, the only evidence of the second strike is Lincoln’s facial profile. On the reverse, the second strike is represented by small portions of the Lincoln Memorial’s colonnade and steps. A tiny die dent shared by both strikes proves the same die pair was responsible for both.

Any weak strike can be attributed to two proximate causes — abnormally low ram pressure or excessive minimum die clearance. Ram pressure is the tonnage delivered to a planchet of normal thickness. Minimum die clearance is the closest approach the dies make to each other in the absence of a planchet. For either malfunction, the ultimate cause is conjectural, with many possibilities having been offered over the years. The sort of instantaneous change in striking pressure documented by the 1999-D Lincoln cent might be due to a brief power interruption, a jam-up in an adjacent striking chamber, or a broken machine part momentarily lodged in the press mechanism.

It would be very difficult to find an in-collar double strike in which the first strike is weak and the second strong. The second strike will inevitably obliterate the feeble first-strike details unless they’re preserved in the form of a surface film afterimage. So one must turn to coins in which a weak first strike is followed by a strong second strike that is delivered off-center. This sequence is seen here in a partially dated Lincoln cent struck sometime in the 1960s. Common die markers show that both strikes were delivered by the same die pair.

The brief, self-correcting nature of some weak strikes was amply demonstrated by a quarter dollar that appeared in the May 23, 2011, column. In this coin the first strike was of normal strength, the second strike was off-center and exceedingly weak, and the third strike even more off-center but a very strong “stretch strike.” All three strikes were delivered by the same die pair.