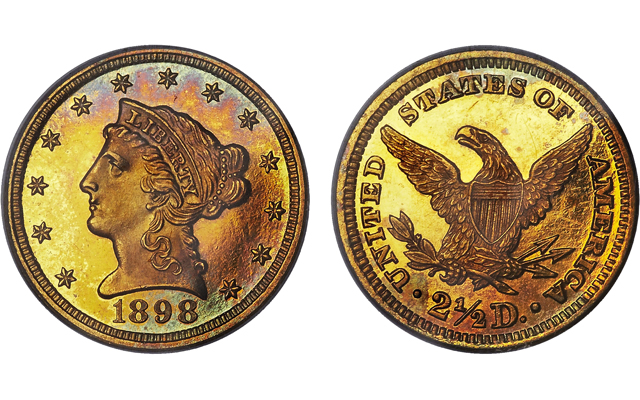 A collector takes personal satisfaction in a recent Market Analysis about this 1898 $2.50 quarter eagle graded Proof 63 Deep Cameo that brought $8,812.50 in a Dec. 4 auction. He was the winning bidder in that auction.

Eric Milton is a longtime collector from Colorado, having started in the 1960s.

I found enjoyable Steve Roach’s Market Analysis in the Dec. 29 issue of Coin World Weekly about three coins, one being a Professional Coin Grading Service Proof 63 Deep Cameo 1898 Coronet $2.50 quarter eagle that sold for $8,812 at the Houston Money show.

I started collecting Lincoln cents back in the 1960s. After reading the “Red Book” and coin collecting magazines (I cannot remember what they were), I decided to save up the money I earned over the summer and from Christmas and talked my mother into taking me to New York City (I lived on Long Island) to get a Proof quarter eagle. I believe she took me to Bowers and Merena, where I purchased an 1895 Proof Coronet Liberty quarter eagle, mintage 119. At that time I had no idea what grade it was; to a 12-year-old it was “Proof,” so what else did I need to know.

The rest of my collection was all very general, Lincoln cents, Indian Head cents, Buffalo nickels, some Walkers, Franklins, anything I could find — what a 10- to 14-year-old could find. I lived near an old English fort, and the only other coin I had of value was a 1787 English guinea that I found in a trench when some water pipes were dug up.

That Proof quarter eagle was the keystone to my small collection. I stopped collecting coins, went to college and moved west to Wyoming. After getting married, I moved to Houston where the finances of a new family led me to sell that coin to a reputable coin dealer in Dallas in the early 1990s.

I have been almost obsessed in my a quest to find another Proof quarter eagle. I loved the first Proof and had to have another one, although the date did not matter. It had to be prior to 1902 when the Mint stopped striking cameos. The Proof had to grade at least a 63 because of the typical hairlines in 62 and below.

I have been watching the market, tracking the sales at Heritage Auctions and a few other dealers, and when this coin came up for auction it was the opportunity I was looking for. The bidding was a little higher than I expected, but I knew this was the culmination of a dream and spending a little more was well worth it.

The coin was a little more than I wanted to spend, but the colors were so unusual, and I have wanted a Proof for many years, so I decided to spend a little more to get it. Looking at the prices of other Proofs over the past few years, I found there is a pretty big range, so establishing a base line was impossible, at least for me.

Hopefully it will not lose value and will be one of a few things my kids will want to keep when that time comes.