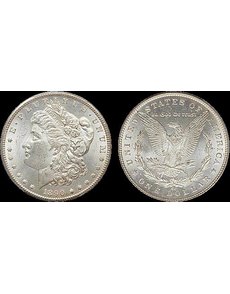 The 1890-CC Morgan, Tailbar dollar, shown, is one of the author’s common “flip that flip” finds.

A coin “flip” may state a coin is one thing when it is actually another, particularly when what sets the coin apart is a feature on the reverse. Coin dealers or their helpers make clerical mistakes on occasion, such as writing only “1909 Mint State 64 Red,” when the reverse of the Lincoln cent bears the V.D.B. initials of designer Victor D. Brenner.

When discovering such an error, it has always been good etiquette to inform the dealer, who may give you a discount when you do.

With the rise of online auctioneering, adhering to that ethic can prove more difficult. Sometimes auction houses only post photos showing the obverse of the coin or the images are of poor quality.

In such cases, the motto “Flip that flip” means requesting via email that an auctioneer also include an image of the reverse, or a clearer photo, because that side of the coin may identify it as a rarer or scarcer variety. Sometimes a seller will post clear photos of the obverse and reverse without realizing that the coin is a rarity.

Once informed of a coin’s rarity, if the auctioneer doesn’t answer my email or change the designation online, it’s “game on.” I’ll bid high and often win the lot.

You can find “reverse rarities” on several denominations. One of the most famous and coveted is the bison with missing leg on the 1937-D Indian Head 5-cent coin — fat chance of finding that beauty. But a less-mentioned rarity is the 3½ Legged Bison variety on the 1936-D 5-cent coin, with a difference in price of 75 cents for the regular strike and $1,000 for the variety in Good 4 condition.

One of my most common “finds” is the “Tailbar” on the reverse of the 1890-CC Morgan dollar, otherwise known as “VAM-4 Far Date, Tailbar Die Gouge, Top 100” in the Comprehensive Catalog and Encyclopedia of Morgan and Peace Dollars, written by Leroy Van Allen and A. George Mallis (hence, the acronym VAM). An About Uncirculated common 1890-CC Morgan dollar costs about $350 whereas the Tailbar variety nets $1,200.

Another Top 100 VAM coin, the 1882-O/S Morgan dollar, features an over Mint mark. Thousands of these coins were struck with three reverse dies originally created for the San Francisco Mint but then used instead at the New Orleans Mint. Several different 1882-O/S dollar VAMs exist, with some over Mint marks stronger than others. All are worth more than the common 1882-O dollar, which had a mintage near 6 million.

I have found all three rarities (Tailbar, Micro S, and O/S) by “flipping the flip.”

I have yet to find the spectacular 1901 Morgan, Doubled Die Reverse dollar, the “Shifted Eagle VAM-3” variety.

That gem just may merit a future column dedicated solely to it, so that you, too, can join the search party.