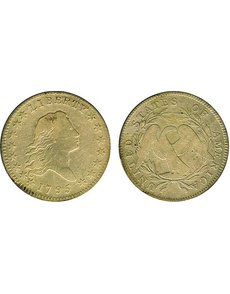 This O-101 variety of 1795 Flowing Hair, Two Leaves half dollar, one of approximately nine examples known, was scheduled to be sold April 2 in Baltimore. Collector David Hatfield purchased the coin unattributed in an eBay auction in November 2009.

What has been determined to be one of now approximately nine known examples of the Overton 101 variety of the 1795 Flowing Hair, Two Leaves half dollar surfaced in Sacramento, Calif., in March.

Los Altos, Calif., numismatist Sheridan Downey said the coin was brought to the March 17 to 19 American Numismatic Association National Money Show by collector David Hatfield. According to Downey, the coin had been purchased by the collector unattributed in the lot description in an eBay auction in November 2009. The collector waited until the National Money Show to have Downey examine the coin.

The coin is cataloged as Overton 101 in Early Half Dollar Varieties: 1794-1836 by Al C. Overton and Donald Parsley.

The key to attributing the variety is identifying the specific Two Leaves reverse, since the O-101 die marriage is the only 1795 Flowing Hair half dollar variety that features Reverse A.

Multiple Two Leaves reverse dies are known, all identified by a pair of leaves below each of the eagle’s two wings. Each of the dies can be identified by unique characteristics.

Hatfield said he decided to sell the rarity after concluding that completing a set of 1795 Flowing Hair half dollar die varieties would be unlikely because of their rarity.

In a March 26 email that Downey sent to collectors on his customer list, Downey said: “The sharpness of the coin is fairly represented by the photos. The coin is an even light grey. It was cleaned awhile back, leaving the surfaces with fine hairlines. Don’t expect it to grade at PCGS [Professional Coin Grading Service] or NGC [Numismatic Guaranty Corp.] The overall detail is that of a strong Fine. The surfaces and edges are free of bumps or defects. I note an abrasion at the crown of Liberty’s head, akin to slide marks on coins housed in albums.”

Downey planned to bring the coin with him to the March 31 to April 3 Whitman Coin & Collectibles Baltimore Expo and accept bids through noon Eastern Time April 2, with the coin selling to the higher bidder. According to Downey, he would not charge a buyer’s fee and would reduce the winning bid to 10 percent over the second highest bid.

Latest in series of finds

Hatfield was also the discoverer in October 2005 of the 1806 Draped Bust, Heraldic Eagle half dollar O-129 discovery coin, now one of two pieces known. Hatfield discovered the 1806 variety also unattributed in an eBay auction.