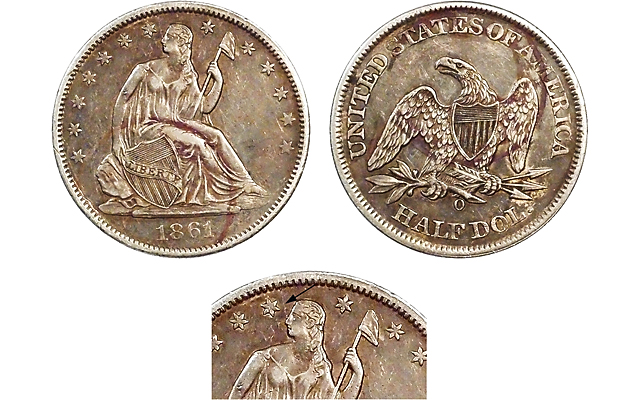 A collector in New Orleans found in a roll an 1861-O Seated Liberty half dollar with a die crack, indicated by arrow, that confirms the variety was struck with a die while the New Orleans Mint was under the control of the Confederacy.

A New Orleans collector never anticipated discovering an 1861-O Seated Liberty half dollar while searching rolls that he expected would contain only Kennedy half dollars, but he did find one.

What makes the find even more special is that the coin is the variety struck with the Seated Liberty obverse die used while the New Orleans Mint was under the control of the Confederate States of America.

The coin is attributed as WB-102 in The Complete Guide to Liberty Seated Half Dollars by Randy Wiley and Bill Bugert. The key diagnostic that attributes production to the Confederacy is the obverse die break from Liberty’s nose to the rim, slightly to the right of the seventh star.

“This popular variety uses the same head die in a late die state as the 4 genuine Confederate States of America (CSA) half dollars,” according to the Wiley-Bugert reference.

Coin World reported in 2006 that 14 different die marriages were used to make 1861-O Seated Liberty half dollars for the three governments. The findings were made partly through a large number of these coins that were recovered from the sunken SS Republic.

Wiley was commissioned by Odyssey Marine Explorations to review its 1861-O Seated Liberty half dollars,which the salvage firm gathered from the wreckage of the Republic.

The sidewheel steamer SS Republic sank in about 1,700 feet of water in the Atlantic Ocean in 1865, after battling a hurricane for two days. Odyssey located the wreck in the summer of 2003 about 100 miles off the coast of Georgia.

The finder has been a coin collector off and on for more than 50 years. The collector told Coin World during a July 9 phone interview that he returned to the hobby with a vengeance in 2009, primarily searching through rolls of half dollars. The collector has been looking for examples containing silver that he could cash in to help finance his other collecting interests.

To fuel his roll collecting, the collector befriended the tellers at several local New Orleans banks where he purposely took out accounts just so he could acquire rolls at the banks. As a customer, he was informed by the tellers when rolls of half dollars were available at the bank.

“I made all the right connections to make coin roll hunting profitable,” the collector said.

The bank tellers set aside the coins for him to pick up on his next visit to their location.

In addition to the half dollars, he also obtained Eisenhower dollars and even two silver American Eagle bullion coins from among coins the bank tellers set aside.

Then the supply of silver coins dried up.

The collector said he stopped searching rolls for the next two years until 2013, when he scheduled knee replacement surgery and needed an activity to keep him busy during recovery.

The collector decided resuming his roll searching was the best alternative.

The collector’s roll search resumed with 1,000 half dollars in 20-coin rolls. He had opened and examined all but three rolls before the collector hit paydirt.

The collector found himself staring at the Seated Liberty half dollar he found in the third to last roll. He turned the coin over and saw the O Mint mark of the New Orleans Mint.

Considering the possibility of what his discovery was, the collector retrieved a coin loupe for magnification and examined the coin’s obverse.

Coin to be submitted to grading service

The New Orleans collector, who wishes to remain anonymous and does not intend to sell the coin anytime soon, said he is only getting around to having the coin professionally certified by a third-party grading service even though he made his find last fall.

The collector believes the coin is in Extremely Fine condition, but will likely be placed in a grading service holder labeled “Genuine” with details of problems since there is a stain on the coin.

Coin World forwarded to Bugert images the collector provided of the coin’s obverse and reverse. Bugert said identifying 1861-O half dollar varieties using photographs are among the most difficult, but this identification was easy. The coin is definitely the variety nicknamed the “CSA Die Crack.”

“[It’s] readily identified by the die crack from the dentil to the right of star 7 to the bridge of Liberty’s nose to her chin and into her shoulder,” Bugert wrote by email. “This die variety is significant because this obverse was also paired with the genuine Confederate reverse die. So, [the] coin was minted by the Confederacy. By the way, this variety is not especially rare (I rate it an R-3), but it has significant collector demand because this variety has the same obverse as the four genuine Confederate half dollars.”

A Rarity 3 or R-3 rating in the Wiley-Bugert reference suggests 301 to 400 examples known in all grades.

The Seated Liberty half dollar was not the only New Orleans Mint find in the 20 rolls he searched during his recovery.

In the second to last roll of the 1,000 half dollars the collector was searching through, he said he found an 1896-O Barber half dollar. The coin is damaged; the obverse was subjected to repeated punches from what appeared to be an ice pick.

The collector said he has been encouraged by additional finds, noting, “I think the stuff is out there. You just have to be persistent.”