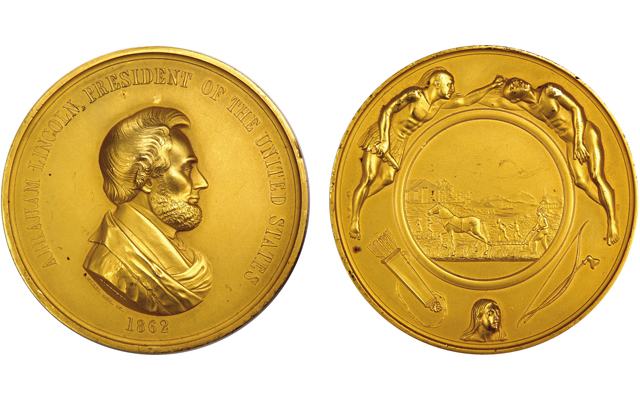 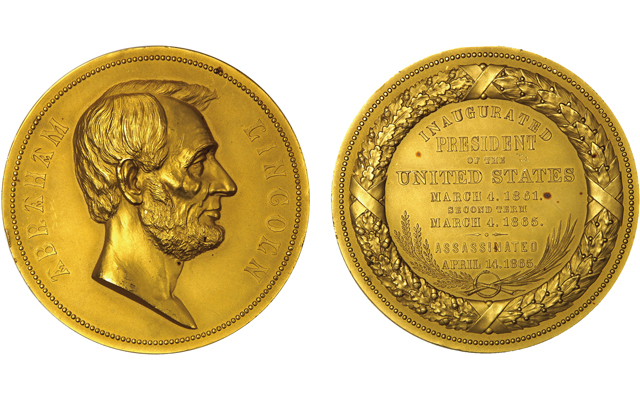 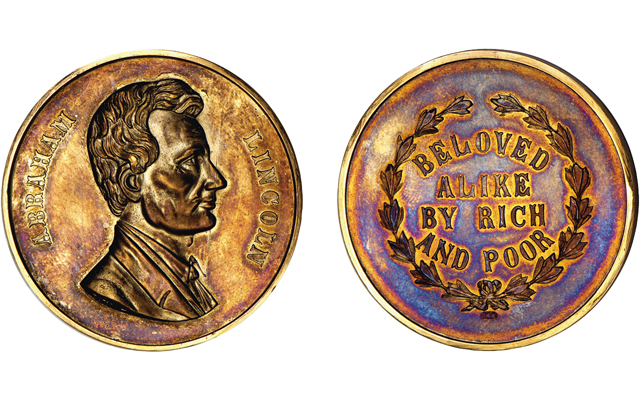 New York numismatist Thomas L. Elder is believed to have issued this 39.77-millimeter gold medal circa 1924. 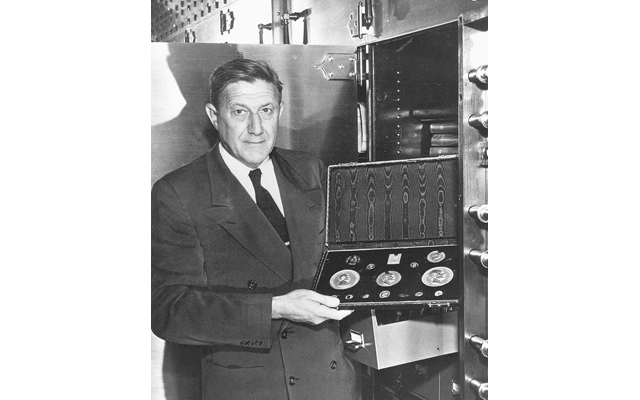 Baltimore numismatist Louis E. Eliasberg Sr. is pictured in this mid-20th century photograph holding the collection in its storage case.

The unique Louis E. Eliasberg Sr. Collection of Abraham Lincoln medals in gold will cross the auction block for the second time in less than five years when it is offered Feb. 5 and 6, 2015, in the Americana Showcase and Rarities Night auction from Stack’s Bowers Galleries.

The 16 lots comprising the Eliasberg auction, which includes the display case, were last offered in The Philadelphia Americana Sale held Sept. 30 to Oct. 2, 2010, by Stack’s.

In the 2010 sale, the combined lots brought total prices realized of $125,177.50. That total includes the then 15 percent buyer’s fee added to the final closing hammer price of each lot won.

The buyer’s fee for the upcoming sale will be 17.5 percent.

Christine Karstedt, executive vice president for Stack’s Bowers Galleries, said each piece in the collection will be offered as an individual lot, as they were in the 2010 auction. For the set to remain intact, the high bidder would have to be the same person for each lot.

One lot features the original presentation case with research files prepared by Eliasberg documenting the collection and his quest to attain each piece.

The custom-made fitted case crafted to house the 16 pieces is gold-stamped PRESIDENT A. LINCOLN/ GOLD MEDALS.

The medals in the set are attributed in most instances according to Julian numbers as chronicled in R.W. Julian’s Medals of the United States Mint: The First Century 1792-1892, or in Robert P. King’s “Lincoln in Numismatics” (published in 1924 in The Numismatist, journal of the American Numismatic Association).

Eliasberg, a renowned numismatist from Baltimore, acquired the pieces comprising the set in 1945 from Stack’s.

The medals in this collection were first assembled by Judson Brenner, an early ANA leader, whose collection was the basis of the Robert P. King catalog.

The collection was handled after Brenner’s death by Philadelphia dealer Henry Chapman. It was purchased by numismatist T. James Clarke of Jamestown, N.Y., and was subsequently acquired by Stack’s of New York City, who interested Eliasberg in the unique assemblage.

Ripstra, a former president of the ANA from Chicago, was a skilled medalist in his own right.

The lots to be offered, their condition, catalog attribution number where noted, and the price realized in 2010 for the lot, are: