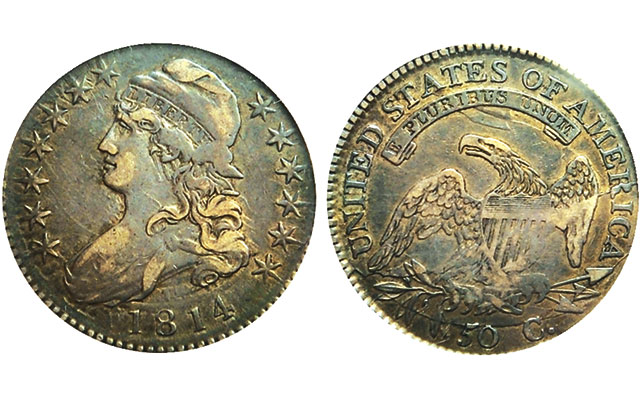 A collection of Capped Bust half dollars is highlighted by this 1814 coin designated as Overton 106a by specialists. It is graded VF-35 by Professional Coin Grading Service.

The Money Tree #1 Collection, as the offering is called, features nearly 430 different die varieties, as identified by Al C. Overton in Early Half Dollar Die Varities, 1794-1836.

The highlight of the collection, according to Sheridan Downey, a specialist who sold some of the pieces to the anonymous consignor, is the Overton 106a 1814 Capped Bust half dollar graded Very Fine 35 by Professional Coin Grading Service.

“It’s a very popular variety with a wonderful die break in a very collectible grade, certified by PCGS,” he said. “That’s what today’s collectors are dying to see.”

Bust coinage is a “two-tier” market, according to another specialist, Brad Karoleff, separated between those coins that can be “slabbed” and those that are not, whether by choice or quality concerns that give grading services pause.

While Karoleff prefers Bust half dollars out of plastic, there is one time it makes more sense, he said.

“There’s only one reason to slab it, and that’s to sell it, to make it marketable to the masses,” Karoleff said. “There’s no need to put mine in plastic, [since] they’re not ready to come to market. They’re easier to play with, to study and to store without all that extraneous plastic. That’s Brad the collector. Brad the dealer says let’s get that in plastic.”

Pricing data for Capped Bust half dollars by die variety is not tracked by general price guides, but Karoleff pointed to sales results from an October 2011 auction by Heritage Auctions. A similarly graded Overton 106a coin realized $489, he said.

The 1814 coin in the Dec. 1 auction is described by catalogers as “original gunmetal iridescent toned.”