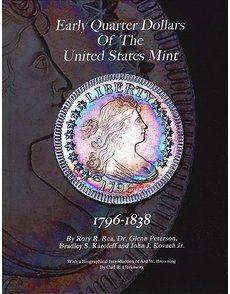 Early Quarter Dollars of the United States Mint 1796-1838 by Rory R. Rea, Glenn Peterson, Bradley S. Karoleff and John J. Kovach Jr. is one of those rare books that is both a great catalog and a wonderful collection of stories.

First the catalog part. Every variety and many die states of early quarter dollars are listed, described and photographed.

The photos, mostly by Rea, are big, bright and clear. Identifying details are blown up. A tiny but important die crack from an olive leaf to a dentil on an 1820 Browning 2 quarter dollar (The Early Quarters of the United States, by A.W. Browning) is enlarged to an easily seen eighth of an inch in one photo. And the quality of the printing is so good that the photo stands up well to inspection with a 14-power glass.

The book, which took more than a decade to produce, lists a condition census of top coins for each variety and a bar chart showing those coins by grade. For some rare varieties, every known coin is photographed.

The census was compiled by Rea and “seasoned quarter specialists” Jim Koenings and Aram Haroutunian and is a delight to read in itself. (The Browning plate coin for the 1806 B-3 quarter dollar, an About Uncirculated piece, sold for the grand sum of $18 at auction by the New Netherlands Coin Co. in 1952.)

If there is a right way to produce a catalog, this is it.

The 388-page, large-format, hardbound book, too, has some great stories to tell. Probably none is so interesting, though, as that of A.W. Browning, himself.

In a biographical introduction by Carl R. Herkowitz, Browning’s life is teased out from the records of a mental hospital, the census and the 1925 ANA membership.

Payroll records show he was a “stenographer.” Herkowitz notes that the author of what numismatic researcher Walter Breen described as “the most perfect numismatic book written on the first try” died from pneumonia on May 20, 1933.

In the book, Karoleff, a fellow Coin World columnist, also details several theories about the mysterious e and l counterstamped quarter dollars of 1815 and 1825. The counterstamps, which some believe were stamped on the coins at the Mint while still in the die, flooded the market in 1882. Where they came from and why they were made remains unknown.

The book is available for $110, post paid, from Karoleff, 8077B Connector Drive, Florence, KY 41042. A $500 deluxe leather-bound edition with additional plates is planned for later this year.