Collecting moderns on a roll 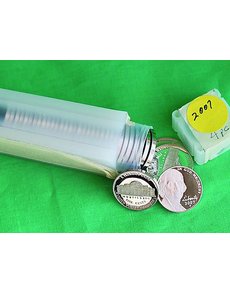 After the silver coins are removed from a Silver Proof set, what is there to do with the remaining base metal coins? Rolls of these modern Proof issues, like the 2007-S Jefferson 5-cent coins shown, are being sold in rolls.

Something that I’ve noticed over the past year is an increasing number of dealers offering coins by the roll.

The increasing availability of rolls is in large part due to the rise in silver prices, leading to an increase in the breaking up of original modern Proof sets.

But it is also due to an increasing number of collections and accumulations of coins entering the market as sellers were enticed by the recent increases in the precious metal market.

As many original modern Proof sets are broken up to get to the silver coins, dealers are often left with quantities of coins of a single issue that they need to move.

Take, for example, a 2007-S Silver Proof set. It contains five State quarter dollars, along with a silver half dollar and dime. When silver was nearing $50 an ounce at the end of April, the silver value for the seven silver coins exceeded the set’s wholesale value by several dollars. The set also has the cent and 5-cent coin, plus four Presidential dollars and a Sacagawea dollar, representing more than $5 in face value. What to do with the nonsilver Proof coins once you’ve sent the silver coins away? Sell them in rolls cheaply! Several dealers in Coin World are advertising Proof Presidential dollar rolls at just $2.50 per coin.

The roll craze hit the hobby hard in the 1960s as coin shops popped up around the country and rolls of Uncirculated coins created a speculative bubble that eventually popped.

Perhaps better than any other coin, the 1950-D Jefferson 5-cent coin represents the roll craze. Most of its original mintage of 2,630,030 pieces did not enter circulation and almost the entire mintage remains available to collectors.

As Al Doyle wrote in a 2005 article addressing rolls in Coin World: “The well-known coin also was the poster child for the train wreck that took place when this market bubble exploded.”

Further, as more baby boomers bring their collections — and their parent’s collections — to coin shops around the country to sell, reminders of the coin roll craze of the 1960s are present in the dozens of rolls that are present in many old-time accumulations. As these older rolls enter inventories, collecting modern coins by the roll becomes increasingly accessible.