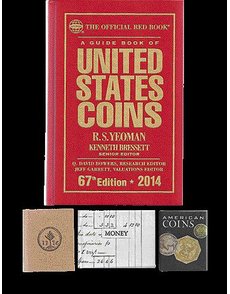 Small in size does not mean lacking in information. These miniature books are treasures for collectors.

Small is beautiful, says the old cliché, and that certainly holds true for numismatic books.

Earlier this year, while doing research at the American Numismatic Society Library, I was enchanted by Librarian Elizabeth Hahn’s exhibit of tiny numismatic publications. A miniature book is a fully-functioning volume, only much smaller than a typical tome.

The Miniature Book Society defines it as no larger than 3 inches in height, width or thickness. International standards are more generous, allowing up to 4 inches. Books meeting the U.S. standard are truly teeny; more reminiscent of a matchbook than of something you might actually read.

But read them you can, even if it does require some practice before you can smoothly turn such diminutive pages. Miniature books have been published for decades on virtually every subject from astronomy to zoology, and fortunately, coins, tokens, medals, and paper money have not escaped the attention of miniature book authors and publishers.

The exhibit at the ANS was truly a global affair, with miniature numismatic books from Russia, Hungary, Japan and Spain all on prominent display. One, Asao Hashino’s Old Coins of the World, was exhibited, for comparative purposes, side by side with a Roosevelt dime (it was bigger than the dime, but only just).

At least six miniature numismatic books have been published in the United States.

We begin with Money: Some Observations. No compiler is credited for this oblong collection of quotations on the subject of lucre. Its frontispiece is a reproduction, in miniature, of a July 22, 1776, PERSEVERANDO $6 Continental Currency note.

As is typical for miniature books, it hasn’t many pages, only 36, and was published by a small private printer.

Money also qualifies as rare, for only 50 copies were printed.

The second volume is more specifically numismatic: Colonial Coins: Illustrated with Numerous Photo Engravings. Once again, no author is credited. The book was published by a small operation: the Hillside Press of Tilton, N.H.

Its 32 pages contain several photo engravings of selected Colonial coins. The covers of the 250 copies feature an illustration inspired by the unique 1776 Massachusetts Pine Tree copper.

The third miniature book is the most atypical. Mark Hoff’s American Coins comes not from a small press, but rather from a commercial publisher, Andrews McMeel of Kansas City, Mo., making it the commonest tiny numismatic book.

It features a pictorial dust jacket.

The book’s ambitions are much larger than its dimensions, for it treats the reader to a color photo-illustrated overview of U.S. coinage, from Colonial through federal.

If you believe that less can indeed be more, you should start a collection of miniature numismatic books. Most are rare and are priced at about $90 to $150.

Next month, we will focus on three miniature numismatic books that merge literature and money.