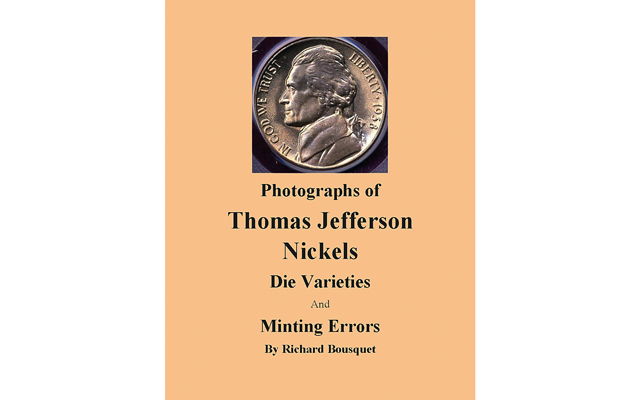 Collectors of Jefferson 5-cent coins have a new photographic reference that includes images of die varieties and errors.

Richard J. Bousquet is author of Photographs of Thomas Jefferson Nickels: Die Varieties and Minting Errors. He can be contacted at rjbousquet48@gmail.com.

New collectors who start with Jefferson “nickels” will break the mold. “Nickels,” as copper-nickel 5-cent coins are commonly called, are the “redheaded stepchild” of coin collecting. Without intrinsic value or major rarities, the Jefferson nickel is one of the least collected of U.S. coins. At most coin shows fewer than 1 percent of the coins are Jefferson nickels. For the new collector, the entire series is available either from circulation or even Uncirculated at a very reasonable price.

After collecting a variety of U.S. type coins and a Lincoln Mint and date set, I became fascinated by the simple, long-running Jefferson nickel series. Beginning with a couple of Whitman folders, I discovered the joy of expanding the set to include both Proof pieces and full-step examples.

Finding a few pieces that didn’t fit the folders caused me to look into the Walter Breen varieties and Cherrypicker’s Guide to Rare Die Varieties. I started studying more about the unusual Jefferson nickels and could not find enough photographs, or even any books of complete information about the errors and varieties within this series.

I learned that I had only begun!

While writing my book Photographs of Thomas Jefferson Nickels: Die Varieties and Minting Errors, I referenced Walter Breen’s Complete Encyclopedia, which lists over 60 different die changes or errors on the Jefferson nickel, and I found that many of the varieties were so subtle that the new collector would not even notice the difference in the coins. For example, in 1971 and 1977 the doors and windows were recut to improve the design. The 1939-D Jefferson nickel with machine doubled D and a Proof 1957 example with a small star that was polished like the 1937-D Indian Head, Three-Legged Bison nickel are two other examples.

So many descriptions can only be enhanced with excellent photographs. Over 300 detailed photographs and explanatory arrows pointing to the particulars permit both new and seasoned collectors to see and understand the details in the varieties and errors.

For the “full-step” collectors, the steps on the reverse have large pictures of each step showing the weak and strong strikes and nicks that would preclude the full step designation.