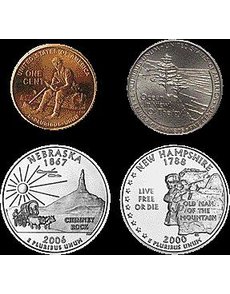 I discovered the world’s greatest hobby (numismatics, of course!) in 1952 at the age of 13.

With a supply of Whitman folders I set about filling in the holes. At the time it was theoretically possible to find Lincoln cents dating back to 1909, including the prized 1909-S Lincoln, V.D.B. cent (I was never so lucky), lots of Indian Head and some stray Liberty Head 5-cent coins, all silver series from 1916 onward plus the occasional Barber issue, and, by going to banks, all Morgan and Peace dollars, except the 1895 dollar from the Philadelphia Mint.

Now to the present time. On the January day I am writing this, I have never received an Anthony, Sacagawea, Presidential or other mini dollar in circulation. Lincoln cents in pocket change mainly date back to 1958.

A 1957 Lincoln cent with Wheat reverse would be “rare.” Five-cent coins mostly date from the 1960s onward, and dimes and quarter dollars have dates from 1965 onward. Half dollars may as well not exist. I haven’t received one in change in years.

Unlike 1952 when everything was of standard design, today it is possible to get an album or folder and from pocket change complete the 50 State quarter dollars set and to acquire District of Columbia and U.S. Territories and America the Beautiful quarters.

We have four different reverses on 2009 Lincoln cents — plus the new reverse introduced in 2010. At first I did not like the last design, but since then I have come to think it was a good change.

The 5-cent coin series offers interesting types from the Lewis and Clark bicentennial years — my favorite being the Ocean in View design.

Roosevelt dimes stand alone as being unchanged in design since 1946. This reminds me to mention that for Whitman Publishing LLC I will be creating books to be published next year on Winged Liberty Head dimes, Roosevelt dimes, Standing Liberty quarter dollars and those half dollars in which Miss Liberty is striding (per the Mint description). Today, the latter series is variously known as Liberty Walking (traditional usage) and Walking Liberty (seemingly more often used today).

While rare dates and Mint marks are no longer to be found in pocket change, in recent decades a dynamic subculture has arisen in the collecting of doubled dies, repunched Mint marks and the like, using the Cherrypicker’s Guide to Rare Die Varieties. Some can be worth hundreds of dollars — a treasure in pocket change.

In contrast, in 1952 hardly anyone was interested in such things!