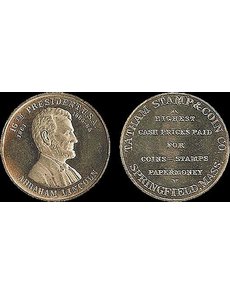 My first mail-order coin dealer was Tatham Stamp & Coin, Springfield, Mass., so the store card illustrated this time reflects abiding interests. This aluminum token is also known in copper. It employs a very common circa 1940 to 1950s Lincoln obverse effigy that appears on a number of other small medals and store cards made by Osborne Register Co. of Cincinnati.

Tatham was operated by Howard E. Macintosh, and specialized in starter collections for beginner numismatists and fledgling philatelists, of which I was both. Its heavily illustrated and well-written catalogs were a joy for a neophyte like me to behold. They were like viewing a Christmas catalog the year around.

My father, a stamp collector, introduced me to Tatham. l still have one of his palm-sized catalogs sent to my dad when he was in college. By my day, Tatham’s catalogs were larger, profusely illustrated, 100-pagers, chock-full of history and lore.

I have five of Tatham’s old coin catalogs before me now as I write this, editions circa 1945 to 1965.

Tatham introduced me to U.S. encased stamps at $6 each. Thirty-five years later, I wrote a book on them. Try to get one for six bucks now!

I purchased other “neat” items that set my imagination ablaze. One catching my fancy was a gilt brass token purporting to be ALASKAN GOLD dated 1862 in the denomination of 2 TOOWAH that I added to my “Civil War” collection, although it was only a brass restrike bearing a 1910 patent date.

I liked their Japanese invasion money promotion also. I purchased $1,116.66 “face value” for only $2, a real “score” for a preteen.

Another purchase was billed as the “World’s Greatest Souvenir ... Lord’s prayer on reverse of genuine Lincoln Cent.” It cost 15 cents, and my 1934 specimen has now toned to a wonderful red and purple hue befitting fond memories.

Tatham was also famous (or infamous depending on your outlook) for its inexpensive restrikes of Colonial and other numismatic items, and collecting kits, reference booklets, and supplies under its house brand TASCO label.

Tatham allowed me to experiment and indulge my childhood curiosities inexpensively in ways that led me to a life-long pursuit of numismatics in its many varieties.

I am grateful that my dad shared his collecting passion with me, and that firms like Tatham and Ben’s in Chicago issued such varied catalogs that helped me find true and satisfying lifelong interests.