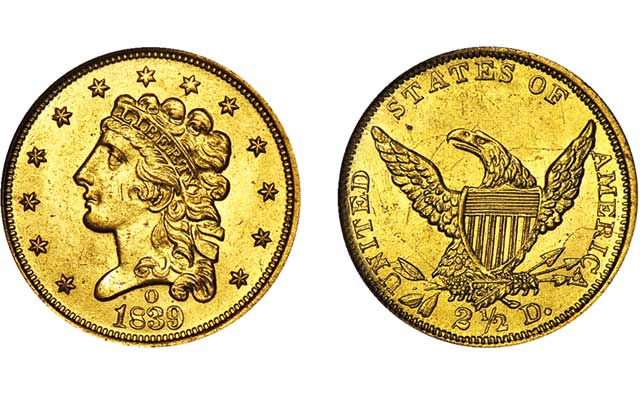 A lovely 1839-O Classic Head gold $2.50 quarter eagle recovered from the wreck of the SS New York sunk in the Gulf of Mexico in 1846. The Mint mark is above the date.

This week I discuss gold $2.50 quarter eagles from 1834 to 1839 — the Classic Head series. Earlier quarter eagles made from 1796, the first year of issue, through the first part of 1834 are very rare today, as the vast majority were melted. After 1820 it cost more than face value to mint a quarter eagle. None were in circulation.

That changed with the Act of June 28, 1834, which reduced the gold content of quarter eagles and $5 half eagles ($10 eagles were not being minted and had not been since 1804). Engraver William Kneass at the Mint created the Classic Head design for the new coinage, a motif copied from John Reich’s Classic Head cent of 1808. The motto E PLURIBUS UNUM used on earlier coins was dropped.

Classic Head quarter eagles were minted continuously from 1834 through 1839. In 1838 the Charlotte Mint struck 7,880 pieces, the first Branch Mint issue. In 1839 the three Branch Mints — Charlotte, Dahlonega, and New Orleans — struck $2.50 pieces. Each bore a distinctive C, D, or O Mint mark on the obverse directly above the date.

Assembling a set in Extremely Fine or finer grades for the Philadelphia Mint coins and Very Fine or finer for the Branch Mints can be an enjoyable experience and can cost less than $20,000.

It was not until the 1890s that collectors paid much attention to Mint marks, and widespread collecting of gold coins by date and Mint did not become popular until the 1930s.

When Branch Mint coins were released in the 19th century, not even the Mint Cabinet curators paid attention to them. The result is that most coins show evidence of circulation, often extensive.

Today, much market emphasis is on high grades. This is fine and dandy, but unless you have a lot of money, your collection is apt to be very small. A collection of Classic Head quarter eagles in Mint State 65 grade, if indeed you can find all in this grade, would cost many hundreds of thousands of dollars.

If you review old-time collections of gold coins, including the most famous names, you will find that high circulated grades are the norm for most Classic Head gold coins.

Follow this path and you will be in good company — with money left over!