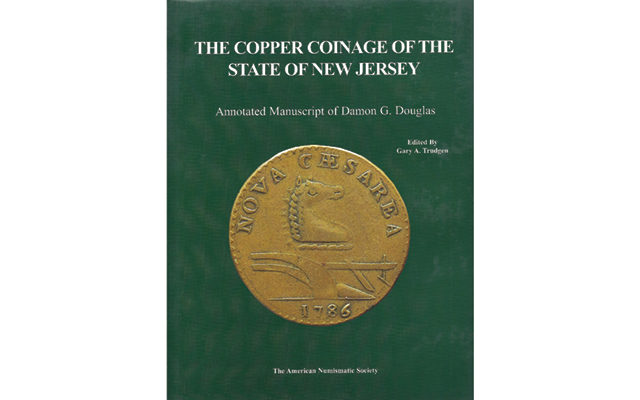 A gold mine of information is available in The Copper Coinage of the State of New Jersey: Annotated Manuscript of Damon G. Douglas.

Some numismatic books are planned but never written, like the three discussed last month.

Then there are coin books that are started, never finished, but published anyway! Their authors failed to cross the finish line due to apathy, procrastination, or illness, but what they did write was so valuable that their incomplete manuscripts found their way into print.

Collectors of New Jersey coinage will recognize the name of Damon G. Douglas, a building contractor, who began researching Garden State numismatic history during the 1940s, and discovered many previously unknown facts about the Rahway Mint and its coinage.

But he eventually lost interest in numismatics. After Douglas’ death in 1974, his son donated his papers to the American Numismatic Society, where the unpublished manuscript became a veritable information gold mine for collectors of New Jersey coins. Thanks to the work of Gary Trudgen, David Gladfelter, Roger Moore, Dennis Wierzba, and Raymond Williams, in 2003, the gold mine was published as The Copper Coinage of the State of New Jersey: Annotated Manuscript of Damon G. Douglas.

If you are interested in the approximately 125 surviving 1794 Flowing Hair dollars, thank the late Jack Collins for launching the intensive study of this great rarity.

Collins was co-founder of the Numismatic Bibliomania Society, and a world-class coin photographer. During the 1980s, he decided to catalog and photograph every surviving example of America’s first silver dollar.

Collins was a procrastinator, but was close to finished when he died in 1996. Collins’ friend (and also NBS co-founder), George Kolbe, teamed with Alan Meghrig to publish the unfinished manuscript as 1794: The History and Genealogy of the First United States Dollar (with Walter Breen credited as co-author).

Sometimes, a writer is sailing along on a manuscript when fate intervenes. As Steve Crain has noted, Daniel W. Valentine roared out of the gate in writing The United States Half Dimes, but he died a few months after publication in 1931.

You can buy Charles V. Kappen’s and Ralph A. Mitchell’s Depression Scrip of the United States: Period of the 1930s, States A Through I, published in 1961, but they never published a projected second volume.

In 1992, Cory Gillilland wrote Sylloge of the United States Holdings in the National Numismatic Collection of the Smithsonian Institution, Volume 1, encompassing gold coins from 1785 to 1834, but 22 years on, there is still no second volume.

Len Augsburger, who suggested this “unfinished” topic, cannot be included in our list because he has finished every numismatic book he ever started!