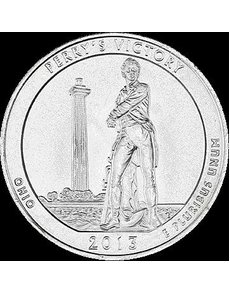 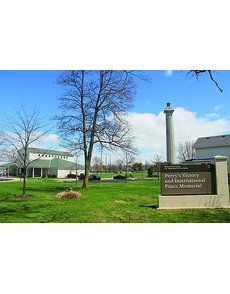 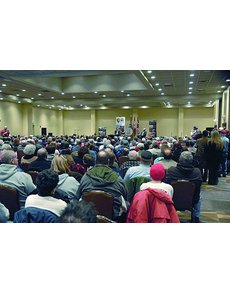 Collectors and other members of the public crowded the Niagara Event Center in Put-in-Bay, Ohio, for the official release ceremony for the Perry’s Victory and International Peace Memorial quarter dollar. 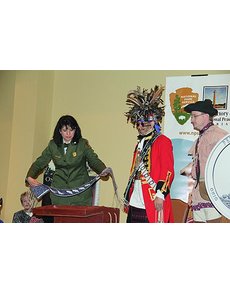 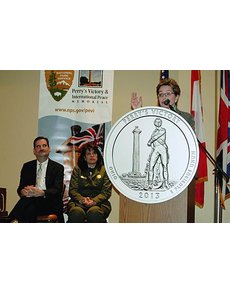 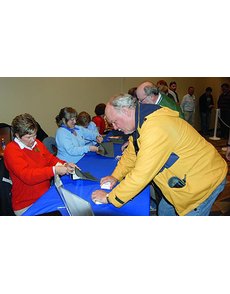 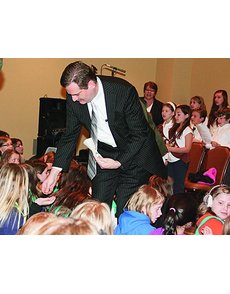 Landry hands out a free example of the new quarter dollars to attendees under age 18 during the April 20 launch ceremony at Put-in-Bay, Ohio. 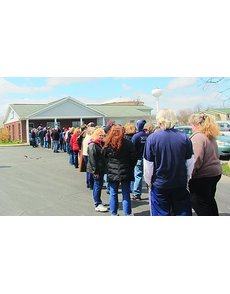 After receiving their allotment of rolled quarter dollars, many collectors lined up outside the nearby Put-in-Bay Post Office to have their rolls postally cancelled as a souvenir of the launch ceremony. 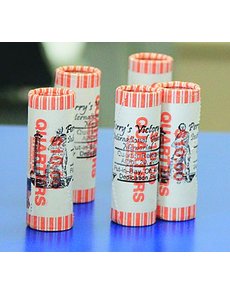 The cancelled rolls of the quarter dollars bear a pictorial featuring Commodore Perry.

The attendance was more than triple the number of year-round residents normally found on South Bass Island, site of the village hosting the event.

Because of extremely high winds and inclement weather the day of the ceremony, Blanca Alvarez Stransky, the National Park Service’s superintendent for the memorial, said April 19 the decision was made that morning to move the ceremony indoors to the nearby Niagara Event Center.

Organizers anticipated a crowd not much more than the annual residential count because of the difficulty in reaching the event site (the island is accessible only by ferry boat or airplane). However, organizers were proved wrong with a standing-room-only crowd.

Because a smaller crowd was anticipated, representatives from First National Bank did not bring the bank’s entire allotment of new quarter dollars for the coin exchange to be conducted after the official ceremony would conclude. As a result, even with restrictions on the number of $10 rolls any one person could obtain, some people left empty-handed. The coin exchange began with a 10-roll limit, which was changed to a five-roll limit while many were still standing in line.

To reach the ceremony, collectors, with or without their cars, had to board a ferry for a 20-minute, frigid ride across the choppy waters of Lake Erie.

Perry’s naval victory against the British forced the abandonment of Forts Amherstburg and Detroit, leaving the Americans to control Lake Erie for the rest of the war.

Kaptur stressed the importance of the victory, not only to the region, but also to the development of the United States. She noted that outside the House of Representatives in the U.S. Capitol hangs a painting depicting an artist’s conception of the Battle of Lake Erie.

Perry’s Victory and International Peace Memorial is depicted on the quarter dollar along with a statue of Perry also found at the national site. The memorial celebrates the long-lasting peace between the British, Canada, the United States and Native American nations, Kaptur said.

In separate remarks, Stransky emphasized the quarter dollar is a “conversation starter” to learn about what she said is sometimes referred to as “the forgotten war” — the War of 1812.

Stransky said the war changed the course of American history, supporting westward expansion and the fulfillment of Manifest Destiny. The war was also crucial in the early development of the state of Ohio, which was only nine years old when war was declared. Many of Ohio’s cities are named after the forts or American outposts that functioned during the war, Stransky said.

During her presentation, Kaptur paid homage to the region’s original inhabitants, noting that many of the northern counties in Ohio are named after Native American tribes, including Ottawa County, where Put-in-Bay is located.

Also during the ceremony, J. Marc Landry, the U.S. Mint’s acting associate director of sales and marketing, emphasized that the memorial is a tribute to Master Commandant Oliver Perry’s decisive naval victory in the Battle of Lake Erie and celebrates the lasting peace among Britain, Canada, and the United States.

“Today we celebrate a national park that is small in acreage but significant in American history, a memorial to those who fought in the Battle of Lake Erie in the War of 1812, a piece of Ohio and American heritage in a setting of extraordinary natural beauty,” Landry said. “It is easy to see why the Perry’s Victory and International Peace Memorial was chosen to be part of the America the Beautiful Quarters Program.”
Following his remarks, Landry presented Stransky with a framed representation of the quarter dollar reverse design along with two quarter dollars.

Following the official ceremony, those in attendance could stand in line for the opportunity to exchange cash for up to 10 of the $10 face value paper-wrapped rolls of new quarter dollars. The obverse of each coin for the exchange bears the P Mint mark of the Philadelphia Mint.

Even after reducing the maximum number of rolls per person, the bank exhausted the $16,000, leaving some in attendance without the opportunity to obtain a single coin.

U.S. Mint officials accommodated some of those collectors by exchanging cash for some of the several hundred unrolled quarter dollars that had been used for the ceremonial coin pour at the conclusion of the launch ceremony.

Ed Hubner from Put-in-Bay, Ohio, was first in line to receive 10 rolls of the new quarter dollars. He said he got his place at the front of the line because he was unable to find a seat with other members of his family.
Jon Brackin from Las Vegas, Nev., has attended a number of the quarter launch ceremonies. To get to Put-in-Bay, he first flew to Wichita, Kan., where he met a coin collector friend who picked him up at the airport for the 16-hour drive to Port Clinton.

For new collector John Vasilof from Cleveland, the coin launch ceremony was the first such event he has attended. He made the trip with collector friend Jim Houp, who also traveled to Lincoln City, Ind., in 2009 for the ceremony associated with the release of the Abraham Lincoln, Formative Years cent.

Collector Chuck Taylor from Springfield, Ill., was also present. He has attended all but one of the 17 America the Beautiful quarter dollar ceremonies, missing only the second one, which celebrated Yellowstone National Park in Wyoming.

The Perry’s Victory and International Peace Memorial quarter dollar, the 17th issued for the 56-coin America the Beautiful Quarters Program, was released into circulation April 1 through the Federal Reserve. ¦