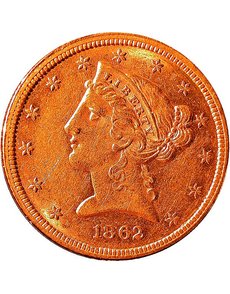 Six coins, including an 1862 Coronet gold $5 half eagle, which is in Mint State 60 condition and worth an estimated $15,000, were stolen from a museum in St. Louis but reportedly returned.

The American Numismatic Association announced July 6 that the coins, which were stolen from a traveling exhibit at the St. Louis Museum of Transportation, were recovered by the St. Louis County Police Department.

The six coins will be returned to the ANA after an ANA official travels to St. Louis and confirms to St. Louis County Police that the coins are indeed from the exhibit, according to Jay Beeton ANA marketing and education director.

Coin World could not determine the circumstances of the coins’ recovery, though the newspaper St. Louis Post Dispatch reported that the coins were apparently returned anonymously to the museum.

“I can only tell you what the St. Louis County Police has authorized me to tell you,” Beeton said. “Anything more detailed would compromise the investigation, because we do want the person who did this [to be] caught.”

Detective Brian Shanika of St. Louis County Police would only confirm that the investigation is still ongoing, and that charges will be pursued against the person or persons responsible for the theft.

The stolen coins were the most valuable items in the traveling “Money of the Civil War” exhibit, which also includes postage and fractional currency, Civil War tokens, encased postage stamps and a Confederate war bond, among other items.

The six coins — five silver and one gold — have an approximate value of $18,844. The most expensive coin among those in the exhibit is an 1862 Coronet gold $5 half eagle, which is in Mint State 60 condition and worth an estimated $15,000, Beeton said, citing the 2012 edition of A Guide Book of United States Coins, commonly known as “the Red Book.”

The theft was the ANA traveling exhibit program’s first and prompted ANA officials to reevaluate the contents of the museum exhibits and enact a new policy mandating that, each time henceforth, as a traveling exhibit is being prepared and readied for shipping, items will be reviewed for current value.

If the coins had not been located, the borrowing organization would have been responsible for any loss or damages.

The coins apparently were noticed missing just prior to the museum’s 11 a.m. opening June 12, a day before the exhibit was slated to open. The coins had last been seen late in the afternoon the previous day, before the museum closed at 5 p.m., special projects coordinator for the St. Louis museum, Kristen Valenti, told the local paper.

The exhibit was expected to continue through June 30, but after the theft, museum officials, as a security precaution, removed the remaining items in the exhibit, leaving the exhibit boards (which show images of the items) in their place, Valenti said.

The ANA offers organizations and clubs a choice of 10 small traveling exhibits, including the “Money of the U.S. Civil War” exhibit that was on display in the museum.

The exhibit panels are designed to lay horizontally in secure table-top exhibit cases, with images guiding placement of the coins and other items in the display.

Each of the exhibits is available for loan for $75 plus insured shipping costs, which range from $58 to $65, depending on exhibit. Discounts are available for ANA members and nonprofit organizations. ¦