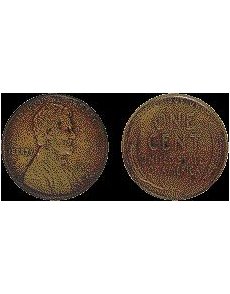 A collector asks why the 1982-P Roosevelt, No P dime, which is scarcer than the 1909-S Lincoln, V.D.B. cent, brings prices well below the levels reached by the cent. Several factors drive the prices of the two coins. 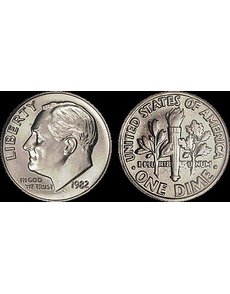 A collector asks why the 1982-P Roosevelt, No P dime, which is scarcer than the 1909-S Lincoln, V.D.B. cent, brings prices well below the levels reached by the cent. Several factors drive the prices of the two coins.

A reader recently asked how a 1909-S Lincoln, V.D.B. cent could be worth considerably more than a 1982-P Roosevelt, No P dime. Both are well-known coins, with variations visible to the unaided eye and both are listed in mainstream references. The reader’s question is prompted by the knowledge that the dime is considered the scarcer of the two, yet sells for much less.

The answer illustrates how collecting patterns can influence demand.

The Lincoln cent was first issued in 1909 and designer Victor David Brenner placed his initials prominently on the reverse of his new cent. The V.D.B. initials were removed later in the year and the majority of 1909 Lincoln cents don’t carry the initials.

The Lincoln cent series is widely collected, and the 1909-S V.D.B. cent enjoys widespread demand as a legendary key issue that is perhaps the best-known 20th century U.S. coin rarity. It is a coin that collectors save up to buy and, for many, represents their first “big” coin purchase.

Even with a conservative 15 percent survival rate of the original mintage, that leaves more than 70,000 available for collectors to purchase.

Many 1909 Lincoln cents — including 1909-S V.D.B. issues — were plucked out of circulation because of their novelty as a new design, thus a surprisingly high number remain available in Mint State. Collectors can expect to pay around $1,000 for a Fine example and $2,100 for a mid-range MS-63 red brown example.

The 1982-P Roosevelt, No P dime also has an interesting story — it was a regular issue coin that left the Philadelphia Mint without the “P” Mint mark that it should have carried above the date. A Mint employee didn’t punch the Mint mark into the die.

The variety surfaced in late 1982 and was well-publicized in both coin collecting and mainstream publications upon its discovery. The next year a second 1982 No P dime type surfaced, characterized by a weaker strike, especially at the 2 in the date, and these sell at substantial discounts to the “strong” variety.

Estimates seem to hit around 10,000 to 15,000 as the number of strong 1982 No P dimes that are available today to collectors and they are widely available in high grades. A collector might pay $175 for a typical MS-64 example.

The 1909-S Lincoln, V.D.B. cent has long been established as a required part of the Lincoln cent set and is likely to endure as a widely collected rarity in the next century. It’s one of the few coins that even noncollectors may recognize as being special. ¦