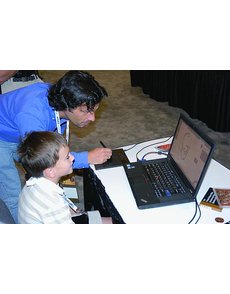 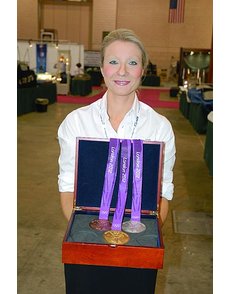 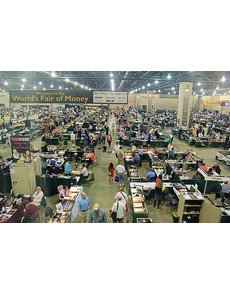 Overhead view of the bourse at the American Numismatic Association’s recently completed World’s Fair of Money captures less than half of the floor area the convention used.

Coins and history met in Philadelphia during the American Numismatic Association World’s Fair of Money, Aug. 7 to 11.

The ANA reported that the show attracted 8,810 visitors, with the ANA adding 446 new members at the convention. While attendance numbered fewer than the 10,204 visitors reported for the 2010 ANA convention in Boston or the 9,113 who attended the convention near Chicago in 2011, the figure represented an improvement compared to the 7,727 who attended the 2009 show in Los Angeles.

Convention General Chairman Kerry Wetterstrom said: “It was a very successful convention and our local volunteers and ANA staff worked tirelessly to ensure that a fun time was had by all. Collectors came to Philly, purchased a coin or two, and left without solving the debate of who had the best cheesesteak!”

Dealers packed the bourse floor, with the ANA reporting that it sold 497 tables in 2012, down from 509 in 2011. Sixteen mints from five continents were represented in the ANA’s World Mint Promenade. Among the participating mints were the United States Mint, which had various heritage assets on exhibit and offered demonstrations by the engraving staff from the Philadelphia Mint, and the Royal Mint from Great Britain, which exhibited examples of gold, silver and bronze medals for the London Summer Olympics.

The Museum Showcase featured among its exhibits a selection of coins from the first Philadelphia Mint loaned by the American Numismatic Society.

The official ANA auctions by Stack’s Bowers Galleries realized $41,874,401 as of Aug. 8. The firm presented nearly 7,000 lots across its various categories. This total is a slight improvement from the firm’s 2011 total of just over $40 million.

Topping the auction offerings was the firm’s sale of a unique 1873-CC Seated Liberty, No Arrows dime, to an anonymous bidder for $1.84 million. The piece was part of a 111-coin set of regular issue Carson City Mint coins — the Battle Born Collection — that realized nearly $10 million.

Heritage Auctions held its sales immediately prior to the ANA show and realized more than $27.5 million, slightly less than the $31 million that it realized in 2011 in Rosemont. Leading the Heritage offerings was a 1907 Saint-Gaudens, Roman Numerals, Sans Serif Edge, Ultra High Relief gold $20 double eagle, graded Proof 58, that sold for $1,057,500, followed closely by a Proof 65 Cameo 1802 Draped Bust dollar that found a new home at $851,875.

Fifty-three competitive exhibit awards were presented at the show, selected from 51 exhibits. David Menchell received the Howland Wood Memorial Award for Best-in-Show for his exhibit “Taking Care of Business: A Selection of Early Philadelphia Merchant Tokens Issued Prior to the Civil War,” and the Rodger E. Hershey Memorial People’s Choice Award, selected by convention attendees, was given to Albert C. Bobrofsky for “Money: How Sweet it Is,” an exhibit of chocolate candy in the form of money.

Arthur and Prudence “Prue” Fitts, of Wolfeboro, N.H., received the ANA’s top honor, the Farran Zerbe Memorial Award at the banquet on Aug. 10. ¦