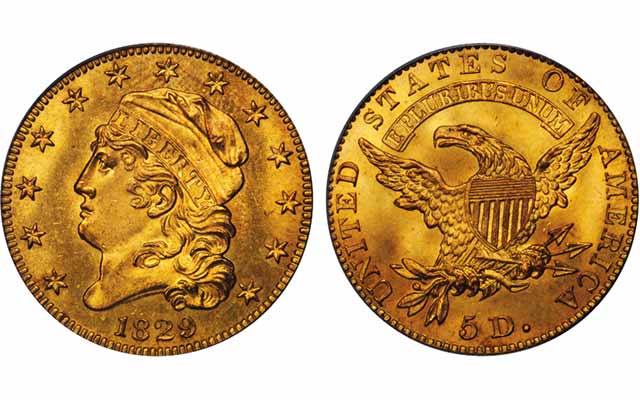 The Joys of Collecting column from the July 20, 2015, issue of Coin World:

The first United States gold coins were minted in 1795 in the form of $5 and $10 coins called half eagles and eagles. Quarter eagles made their debut in 1796.

The Mint struck gold coins at the request of depositors of gold bullion, usually presented in the form of foreign gold coins. Many, if not most, of the new federal coins were exported. In 1804, the Mint stopped producing eagles, hoping that half eagles would circulate domestically. This did not happen, and most were exported.

Beginning in 1820, the international market price of gold bullion rose to where it cost more than face value to strike a $5 coin. All gold disappeared from circulation. Depositors desiring coins for export paid the premium and obtained tens of thousands of half eagles, which at their destination, mainly Europe, were valued for bullion content.

When the Bank of England received a lot of half eagles they were melted and coined into British sovereigns. Similarly, 8-escudo doubloons from various Central and South American mints were melted and the metal was made into sovereigns.

Refinement was necessary because sovereigns, half eagles, and other coins from around the world were of varying weights and purity. Doubloons made at one South American mint might have different gold content than those from another mint.

In 1829 the Philadelphia Mint coined 57,442 Capped Head half eagles. Only about 20 are known today! Gold coins of that decade are the rarest of the rare.

On June 28, 1834, the Coinage Act lowered the weight of gold coins, after which the new issues circulated widely in the United States.

From the mid-19th century onward, many gold coins of the lighter standard were again exported. Those sent to England were melted. Happily, millions of pieces sent to France, Germany, Switzerland (in particular), Argentina, and other countries were preserved.

While from 1795 to 1834 American gold coins were strange and rare in comparison to those of certain other countries and were melted, later they became the standard of the world.

As you may know, tens of millions of U.S. gold coins were repatriated after World War II, but I am not aware of even a single pre-1834 coin among them!