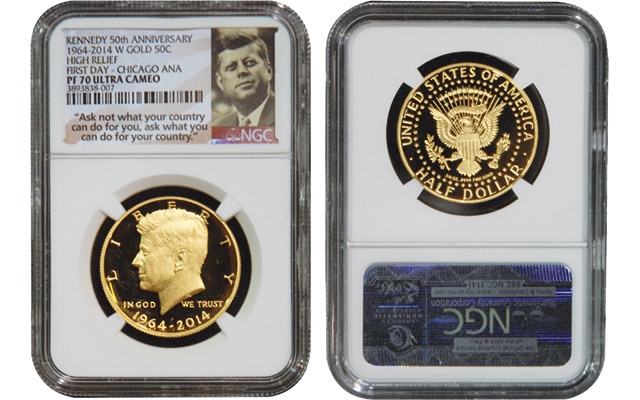 NGC required proof of purchase receipts along with Proof Kennedy gold half dollars submitted to the firm, for the coins to receive a special grading label tying the coin to a specific sales venue or identifying it as from the first day of sales.

Coin World is looking back at its five most-read new stories of the week, according to reader metrics.

4. Odyssey Marine Exploration continues to recover treasure from SS Central America: Gold, gold and more gold in being brought up in the form of coin, nuggets and dust.

3. Legislation aims to replace $1 paper note with $1 coin to same money, prevent waste: Preventing waste and implementing cost savings and revenue enhancement would summarize the purpose of the 17-page bill.

2. Convict’s love token, made from 1797 British Cartwheel penny, realizes $560 U.S. in auction: The artifact of a convict’s love nearly tripled its estimate when sold in Noble Numismatics’ July 29 sale.