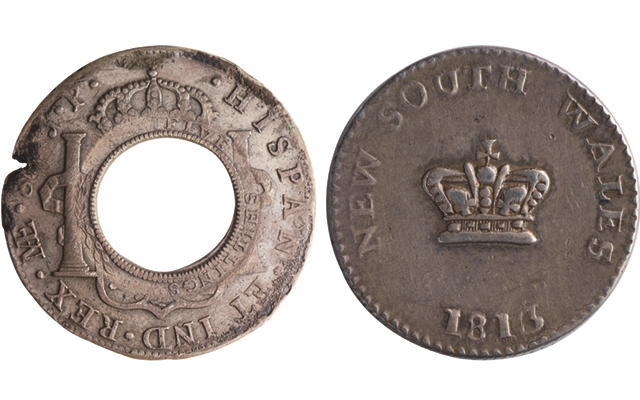 An 1813 Holey dollar, left, and “Dump” were among 12 coins stolen from a display at the State Library of New South Wales on Aug. 6.

Images courtesy of the State Library of New South Wales.

Coin World is looking back at its five most-read new stories of the week, according to reader metrics.

5. A month of diligently searching rolls finally yields two different Presidential dollar coins: By concentrating his roll searching efforts on cents, half dollars and small-sized dollar coins, a Coin World columnist got a real kick out of the variety of collectible coins that turned up.

3. Double-denomination Series 1974 '$30' note sells for $28,200 in Heritage ANA auction: The 'King of errors' sold during the Currency Platinum Night auction at the World's Fair of Money.

2. Market starts to sort itself out for gold Kennedy half dollars after 'hoopla' during release: For prices to remain high, there needs to be sustained demand. The coin market is smart, and has a way of sorting these things out.