1815 Capped Head gold half eagle a rare and expensive item 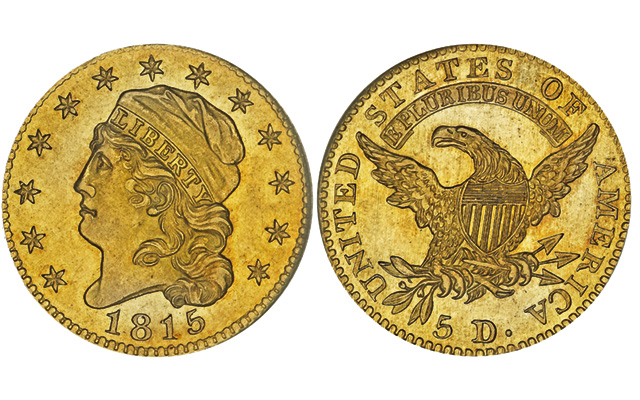 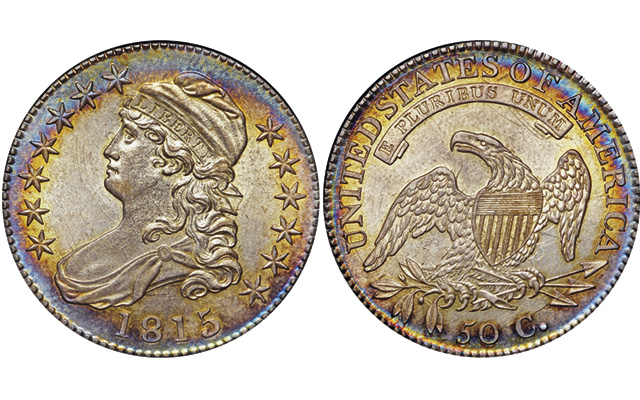 This 1815/2 Capped Bust half dollar from the Eric Newman Collection, graded MS-64+ by NGC, sold for $117,500 in November 2013. It shows beautiful toning, and strong clash marks on the obverse and reverse fields. 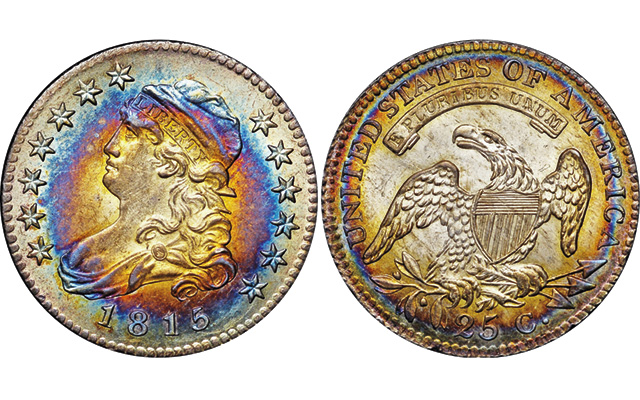 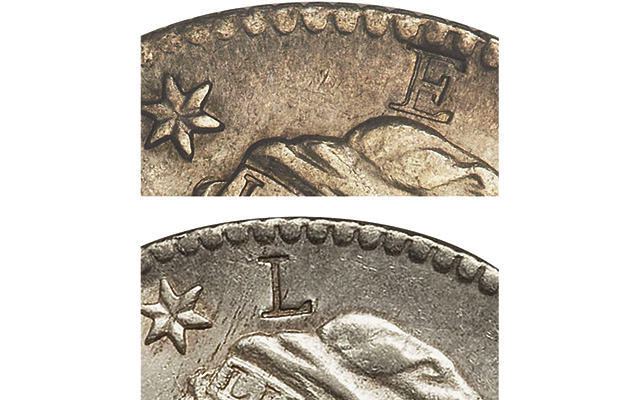 Two 1815 Capped Bust quarter dollars are shown from among several that were counterstamped with E or L. Why?

Editor's note: The following is a portion of Bill Eckberg's Coin World cover feature on U.S. coins in the War of 1812 era. See links to the rest of the series at the bottom of this post.

The 1815 Capped Head half eagle, or gold $5 piece, is an extremely rare and expensive coin; only the wealthiest and most patient collectors can ever hope to own one. The entire mintage of 635 coins was struck, probably in less than an hour, on Nov. 3, 1815, for Thomas Parker, Charles Kalkman, and the Bank of Pennsylvania, who deposited the gold bullion. Of that mintage, Walter Breen’s 1988 Complete Encyclopedia of U.S. and Colonial Coins identifies 12 to 14 survivors. Numismatic Guaranty Corp. has certified four, with the highest graded Mint State 64; Professional Coin Grading Service has certified only three with the highest graded MS-65. Coin World’s Coin Values lists a value of $100,000 in Very Fine 20 and $210,000 in About Uncirculated 50.

The 1815 Capped Head half eagles are of a design by John Reich. Born in Germany in 1768, he emigrated to the United States in 1800. Hired as assistant engraver of the Mint in 1807 at a salary of $600 per year, Reich redesigned all denominations except dollars and eagles, neither of which was produced while he was employed at the Mint. He quit a decade later, after receiving neither a promotion nor even a raise since his hiring.

The 1815 Capped Bust half dollars are somewhat scarce. They were all struck from a single pair of dies, which was overdated from 1812. Several hundred examples are known, but they are under heavy collector pressure, as the single variety is needed by both variety and date set collectors.

It is unclear when the 47,150 half dollars were struck, but they were delivered on January 10, 1816. These are of a Capped Bust design by Reich.

Interestingly, though the 1815 Capped Bust half dollars were delivered in 1816, no 1816-dated halves exist. Just hours after the Jan. 10 delivery, a fire at one of the Mint buildings destroyed the rolling mill used to make strip for the planchets. No silver or gold coins could be produced thereafter until the mill was replaced in 1817.

Quarter dollar mintage resumed in 1815 after none had been struck since 1807. The initial bullion deposit at the Philadelphia Mint came from the Planters Bank of New Orleans, which specified that it wanted its bullion coined only into quarter dollars.

A great mystery about 1815 quarter dollars concerns several that are found with either an “E” or an “L” counterstamp over the cap worn by Liberty. The positions of the counterstamps are always the same as illustrated. Despite years of research and speculation, nobody has come up with a convincing explanation of what they mean or why, when or by whom they were made. But they do give some collectors a reason to own three examples of the variety: no counterstamp, E counterstamp, and L counterstamp.