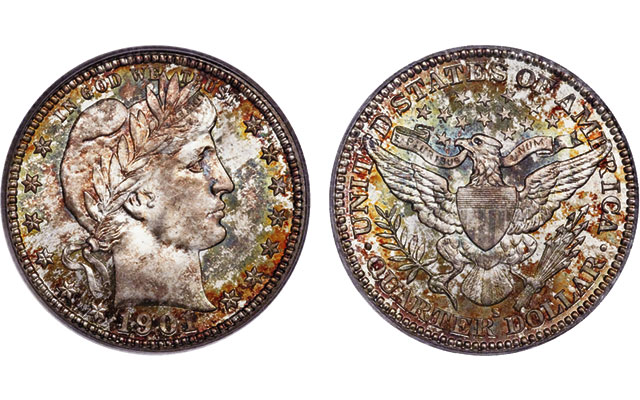 One of Gardner’s favorite coins is this 1901-S Barber quarter that he calls “truly hypnotic to look at.”

Over the last few years and in the coming few years, we are being treated to multiple major collections coming to auction.

The sales of collections assembled by Eugene Gardner, Eric P. Newman and Donald G. Partrick, along with the collections of the Pogue family and the Henry P. Kendall Foundation, continue to energize our market by providing fresh material. But the sale of so many great collections will also force buyers to make tough decisions on what they can, and can’t, buy.

Even great collectors have to make tough decisions. Gene Gardner is a longtime coin collector who started in the 1940s when he was 5 years old. He recalled in a recent interview in Heritage’s Intelligent Collector magazine that in the 1950s coin prices were different than today. “If you spent $10 or $15 on a coin, that was something,” he recalled. He sold some of his collection in 1965 at a Stack’s auction, and he stopped collecting “totally cold turkey.” He returned to collecting in the 1990s, and after dealing with some sticker shock, he started taking advantage of buying opportunities such as Bowers and Merena’s auctions of the Louis Eliasberg Collection.

His collection is especially strong in Seated Liberty coins. He developed a fondness for the quarter dollars, in large part because he was constantly told that it was the toughest series to complete in highest quality.

One doesn’t build this type of collection without effort. Gardner estimates that he’s probably bid in every auction over the past 15 to 20 years. Of course, a few did get away, like the unique 1873-CC Seated Liberty, No Arrows dime that went for $1.8 million at a 2012 auction. Gardner focused on buying the exceptional Seated Liberty quarter dollars from that collection but let the dime slip away. Even the top collectors have to make decisions on how to best allocate their resources.

In a collection of 3,000 coins how does one pick a favorite? For Gardner, it’s his 1901-S Barber quarter dollar graded Mint State 67. It sold for $258,500 at the first Heritage auction of his collection on June 23. He said, “It is truly hypnotic to look at. The colors are beautiful. It’s hard to capture in a still photograph, but when you have the coin in hand, you can see it.”