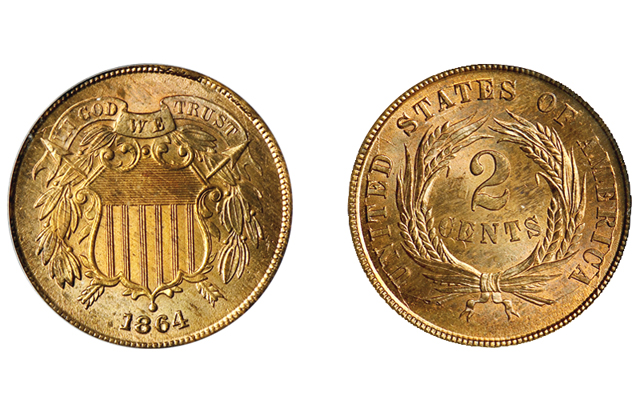 Shippee says that it may make more sense to buy more available coins from a reputable dealer as the price will likely be near the average auction result and a collector will gain a valuable relationship with the dealer. Shippee purchased this 1864 Shield, Large Motto 2-cent piece from Legend Numismatics in 2001 for $1,100 and resold it for $2,530 about seven years later.

It seems that the rare coin market is turning more to auctions as a retail method of buying and selling coins, but dealers can offer guidance and opportunities that auction houses can’t. Most dealers offer a want list service where a collector tells a dealer what coins are needed, and a dealer tells you when those coins come on the market. Shippee provides a helpful note on this, writing: “It’s probably not a great idea to ask more than one or two dealers at a time to look for a specific rare coin. You don’t want to have too many people scurrying around a coin-convention floor looking for the same coin or, worse, bidding against each other at an auction. You’ll probably have better luck, and develop closer relationships, by working with one or a small number of dealers who will come to know your budget, tastes, and the kind of coins you’ll like.”

Where with dealers it’s important to know the individual, with auctions it’s essential to learn the system and how major coin auctions operate. Bidding at auction is not always what people expect and rare coin auctions often move much faster than potential bidders anticipate. As Shippee observed about one auction, “The bidding went very quickly — not at all like some art auctions I’d seen in movies, where each piece is wheeled out for bidders to gape at before the auctioneer begins the process of eliciting one bid after another from smartly dressed men and women who convey their intentions with subtle eye blinks and ear tugs,” he wrote. Instead, most coin auctions today have the bulk of bidding action taking place online before the auction even starts. A regular coin auction by a large auctioneer may go through as many as 150 to 200 lots per hour.

To participate in an auction, a bidder must register with the auction house, and typically registration is required even to view auction lots. A bidder can participate via live bidding on the auction floor, bidding live online, by placing a bid prior to the sale, or by working with a dealer to bid on the collector’s behalf. Most auctions don’t allow returns, and bidders pay a buyer’s fee on each lot, with most brick- and-mortar coin auction firms charging 17.5 percent as a buyer’s fee.