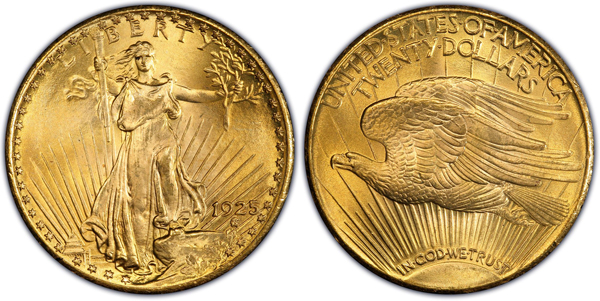 A 1925 Saint-Gaudens $20 double eagle (but not the Professional Coin Grading Service Mint State 67 example pictured here) was dropped into a Salvation Army red kettle in 2013.

A holiday tradition steeped in numismatics has developed in Southwest Florida over the last decade.

Each year around this time, USA Today reports, a gold U.S. coin — last year it was a 1925 Saint-Gaudens $20 double eagle — is dropped into one of the many Salvation Army red kettles in the Fort Myers area, with the same note.

“In loving memory of Mimi,” the note reads.

The person who gives the coins is unknown. The locations of the kettles into which they have been dropped are numerous. Frankly, one can’t know if a Mimi coin will appear once again in 2014.

"In 2011, a bell ringer described the Mimi donor as a tall man, which narrows the scope to the 324,000 men in Lee County, minus short guys,” USA Today’s report reads. "The description is just as scant for Mimi. Was she someone's wife, daughter or Shih Tzu?"

The coins have typically brought in at least $1,000 for the Salvation Army. Last year’s coin, USA Today reports, was valued at $1,300.