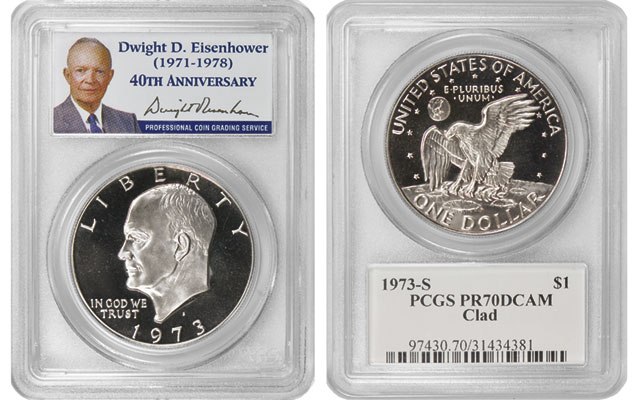 A 1973-S Eisenhower copper-nickel clad dollar in Proof 70 Deep Cameo, one of just three in this grade certified by PCGS, sold for $9,075 at a Jan. 11 GreatCollections.com auction.

The story: The market for top-quality Eisenhower dollars continues to rise as collectors discover the rarity of some issues in this short series that was issued from 1971 to 1978.

In 1973, two types of Proof Eisenhower dollars were struck. One had a silver-copper clad composition (40 percent silver) and was sold individually to collectors. The other was the usual copper-nickel clad dollar included in Proof sets.

In a Jan. 11 GreatCollections.com auction, one of three PCGS Proof 70 Deep Cameo copper-nickel clad 1973-S Eisenhower dollars brought $9,075. The auction firm noted that the offering represented the first example of this date in this “perfect” PCGS grade to trade at public auction. To contrast, PCGS has graded nearly 15,000 examples of the copper-nickel clad 1973-S dollar in Proof 69 Deep Cameo, and these sell for as little as $15 when offered at auction.