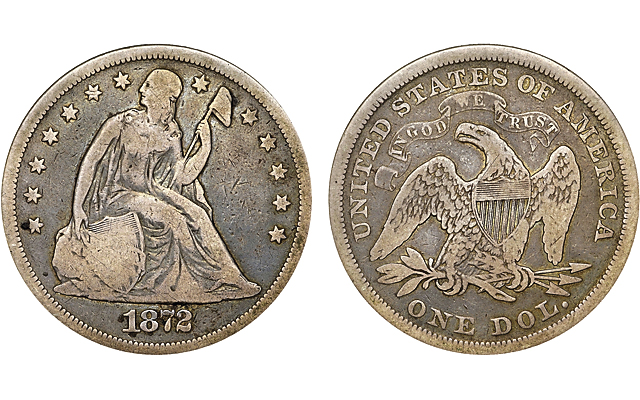 Learning to grade by books and photographs is a key start to understanding coin grading, but images of the obverse and reverse of a single coin can only provide so much information.

A key issue with rare coin grading guides — including Coin World’s Making The Grade — is that they show a single coin that is typical for the grade. As any collector can tell you, not all coins are typical.

Generally the coin market uses market grading, where a coin’s grade is based on both wear and consideration of how it will trade in the marketplace. Eye appeal, an assessment of a coin’s attractiveness, is a key component in market grading, even for circulated coins.

Occasionally I’ll purchase a coin for its educational value to share in my presentations to collector groups. Last year I bought at auction an 1872 Seated Liberty silver dollar graded Fine 15 by Numismatic Guaranty Corp. It was formerly in the collection of St. Louis numismatist Eric P. Newman and the lot included his original brown paper envelope for the coin where it’s graded Very Good, carrying a handwritten price of $2.50.

Traditionally, collectors look at pick-up points on circulated coins in certain grades as a kind of shorthand to determining the grade. These are specific areas where wear can be seen. Some of the traditional grade markers include full LIBERTY visible on the headband of Liberty Head 5-cent pieces and Barber dimes, quarter dollars and half dollars.

Traditionally, Seated Liberty coins should have a readable LIBERTY across the shield to grade Fine 12 or better. The “Red Book” (A Guide Book of United States Coins) defines a Fine 12 Seated Liberty dollar as having “all seven letters of LIBERTY visible, though weak.” Making the Grade notes that some letters may not be visible on Fine Seated Liberty dollars.

In the case of my 1872 Seated Liberty dollar, just four letters of LIBERTY are visible, but the remaining elements are clear and bold and the eye appeal is generally positive. The market accepts this coin as a choice Fine coin, although by the traditional technical grading standards employed by Mr. Newman decades ago when he purchased this coin, the grade was lower.

One example where market grading has sharply changed value perceptions over the past few decades can be found with the Indian Head 5-cent piece, or “Buffalo nickel.”

Traditionally, Very Fine 20 examples should have a full horn on the reverse’s bison. However, especially for certain Denver and San Francisco Mint issues that are weakly struck, even Mint State examples may lack a full horn. Thus, market grading looks at the totality of wear on a coin, adding for good eye appeal when appropriate, to create a market grade.