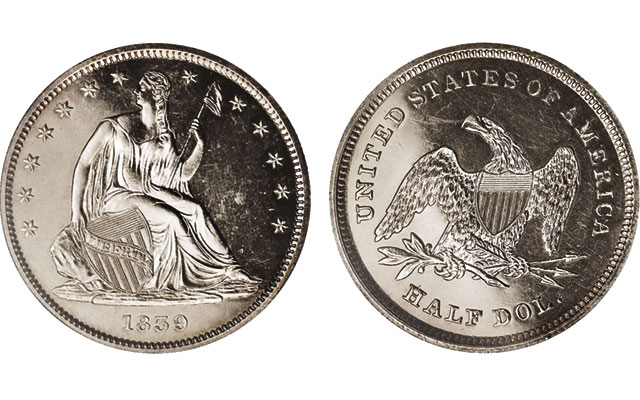 A presumably unique Proof 1839 Seated Liberty, With Drapery half dollar brought nearly $100,000 at Heritage’s Oct. 27 auction of the Gardner Collection.

Eugene Gardner’s decision to sell his varied collections over a series of Heritage auctions starting in 2014, rather than in one large auction, serves several purposes.

First, collectors and dealers can stretch out their bidding over the course of multiple auctions rather than having to use all of their funds in a single auction. This is especially useful in a crowded auction landscape that includes Heritage’s multiple auctions of St. Louis numismatist Eric P. Newman’s holdings and the already crowded 2015 auction calendar that is peppered with several great collections slated to come to market.

Gardner purchased around two-thirds of his coins via public auction, which is useful when considering the performance of Gardner’s collection, because unlike with private sales, prices realized at auction are public record.

An analysis of the first two Heritage auctions of Gardner’s coins shows that many went up in value, a few went down, and some went unchanged in their trips to the auction block. But what to make of the coins that went down?

It also has everything that the market demands right now: great condition, solid provenance and rarity.

Prices for other coins in Gardner’s collection have improved tremendously from their previous offerings.

For example, an 1802 Draped Bust half dime graded About Uncirculated 50 sold at a 2009 Heritage auction for $195,500 (then graded Professional Coin Grading Service Extremely Fine 45). At the first Gardner auction on June 23, 2014, the piece (upgraded to PCGS About Uncirculated 50) sold for a strong $352,500, that price serving as a testament to the quality and rarity of the piece.

A collection’s success at auction needs to be looked at as a whole, because at auction, anything can happen with a single lot. Success is best measured by how well a collection does in total.