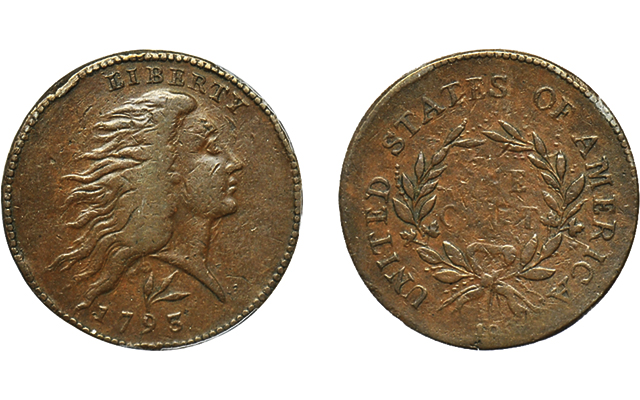 The story: Mid-range 1793 Wreath cents in grades including Very Fine have wide variances in the prices that they bring at auction. Some are gorgeous, with smooth chestnut brown surfaces while others might have light porosity or rim damage that is not substantial enough to put the coin into a net-graded holder, but still impacts the appeal.

The catalog entry notes that the coin has details that stand up “unexpectedly well” to the finest known example of the variety, “with the most obvious difference noticeable in the lack of deeper fine lines within the broadest portion of the tresses.”

The description fleshes out the compromises that often go into this mid-range grade, writing, “attractive chestnut-brown patina goes a long way to making the eye-appeal what it is, and by comparison to the usual parade of corroded examples, any collector would be delighted to add a caramel-smooth and bold example such as this to his set. A couple of rim dings will be noted on the obverse, but they go with the territory at the commercial VF grade level.”

The firm offered a third 1793 Wreath cent, graded Professional Coin Grading Service About Uncirculated 50, that also went unsold, at an estimate of $32,000 to $40,000.