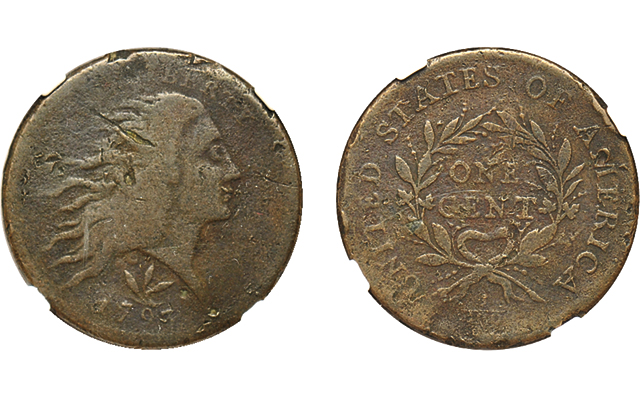 A 1793 Flowing Hair, Wreath cent graded NGC Very Good Details, Damaged, brought $2,012.50 at Scotsman’s July 18 Midwest Summer Sale. The four apparent indentations at the edges show the grips in the coin’s holder, not defects in the coin itself.

Like any coin at the low-end of the price scale for a particular issue, it had its pros and cons.

Regarding the positives, the lot description stated, “Modestly micro-porous overall, the coin nonetheless features unexpectedly nice, frosty walnut-brown color that would immediately appeal to any aficionado of early copper.”

On the cons, it stated, “The NGC disclaimer properly calls attention to a prominent, ancient oblong scar in Liberty’s tresses, as well as an additional dig and several irregular smaller hits, a couple of which have found their way up to the top of the obverse rim.”