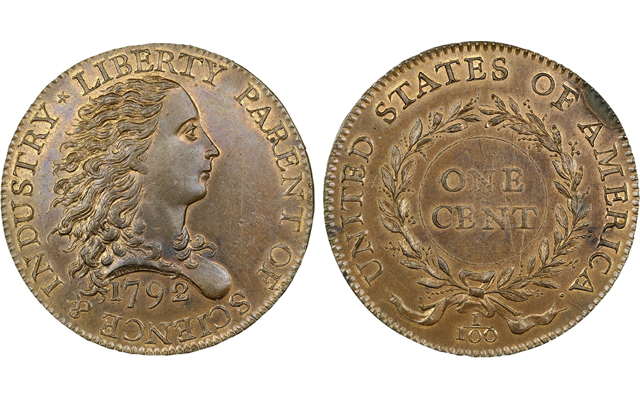 This 1792 Birch cent from the Donald Partrick Collection was among the seven coins that individually sold for $1 million or more during Heritage's FUN auctions in January. It led all lots with a final realization of $2.585 million.

The size and scope of rare coin auctions and the growth of auctions as a retail vehicle for collectors to buy and sell coins is powerfully shaping our hobby.

The Professional Numismatists Guild’s 2014 survey reported that 2014 saw nearly $536 million in rare U.S. coins trade at public auction, surpassing the 2013 total of nearly $393 million. With the many collections coming to market in 2015 — Gardner, Newman, Partrick, and Pogue to name a few — the record will likely be topped in 2015.

The $536 million number does not include auctions by U.S. firms of paper money and world coins, which would push the total to an even higher number.

The results of Heritage’s Florida United Numismatists convention auctions show a nearly insatiable hunger for the top trophy coins in the marketplace. That trend is consistent across nearly all segments of the fine art and collectibles market, with records set in diverse categories including gems, classic automobiles, fine art and watches.

For comparison: in 2014 a dozen coins each sold for more than $1 million at auction among all of the major U.S. numismatic auction firms

Just at the Heritage 2015 FUN auctions in Orlando on Jan. 7 and Jan. 8, seven coins individually sold for $1 million or more. On the morning of Jan. 7, before the live floor and online bidding had begun, seven coins had already topped the $1 million mark in pre-sale online bids.

A unique pattern 1792 Silver Center cent without the silver plug was typical of the rarity and quality of the 1792 patterns in Heritage’s Donald Partrick Collection auction at the 2015 FUN show. The coin, graded Mint State 62 red and brown by Numismatic Guaranty Corp., realized $446,500.

The PNG estimates the size of the rare coin market in 2014 at around $5 billion, meaning that auctions compose only around 10 percent of the total market. The rest is handled by dealers in retail transactions to collectors and wholesale sales to other dealers.

The PNG added, “If you don’t know rare coins, you’d better know your rare coin dealer,” and said that dealers still play an essential role in the auction process in that they advise major collectors.

It’s a misconception to think that all great rarities make it to auction, and as the PNG survey indicates, public auctions represent just a fraction of the total rare coin market. Auctions are important because their transparency (it’s clear what a coin sold for, or if it does not sell) has the potential to shape the market in ways that the private market cannot.