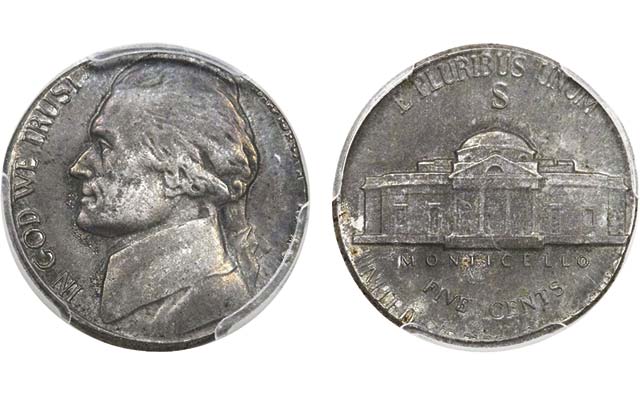 As World War II placed pressure on natural resources including metals, the U.S. Mint facilities were busy working with new compositions for the cent and 5-cent denominations.

In 1943 only, Lincoln cents were struck on zinc-coated steel planchets.

This 1943-S Jefferson 5-cent coin is struck on a steel planchet perhaps intended for a 1943 Lincoln cent, although at 2.75 grams it is slightly heavier than the 2.7 grams that one would expect.

This one, graded About Uncirculated 55 by Professional Coin Grading Service, experienced some light circulation, but avoided intentional scratches or test cuts from those curious to learn more about this unusual coin. It sold for $3,760 at Heritage’s Jan. 30 Long Beach Expo auction.