What this 1861-S Coronet double eagle just sold for 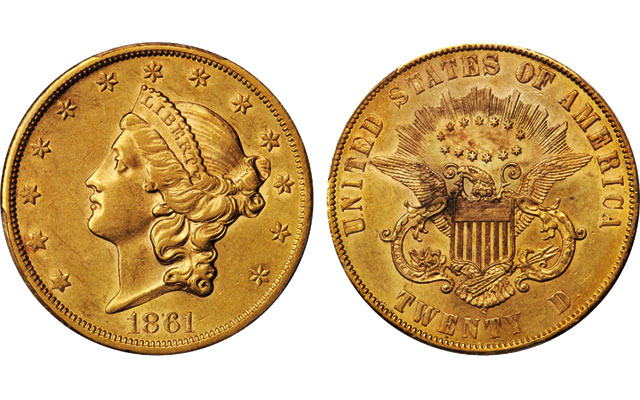 An 1861-S Coronet, Paquet Reverse double eagle graded About Uncirculated Details, but damaged and repaired by a previous owner, sold for a strong $52,875 at Stack’s Bowers’ Oct. 30, 2014, Baltimore Expo auction.

When one of two known 1861 Coronet, Paquet Reverse $20 double eagles brought $1,645,000 at Heritage’s American Numismatic Association auction this past summer, the sale brought attention to this one-year design type. It features the slender letters of Anthony C. Pacquet, and the short-lived design was discontinued after the elegant narrow rim, opposite the wider obverse rim, led to poor wear characteristics.

While just two of the Philadelphia Mint coins are known, approximately 100 of the San Francisco Mint issues survive from a mintage of 19,250 pieces. Examples in all grades are expensive.

This 1861-S Paquet Reverse double eagle was graded About Uncirculated Details, Repaired, by Professional Coin Grading Service, and Stack’s Bowers notes: “The repair is fairly minor and rather well executed, to the point where it does not adversely affect the overall presentation of the coin. Possibly mounted on the reverse at one point in time, evidence of solder removal is noted for the inside of the eagle’s left (facing) wing, and the field within the circle of stars above the eagle has been extensively, yet expertly tooled.”