Capped Bust half eagle with different '8' punches sells for $13K 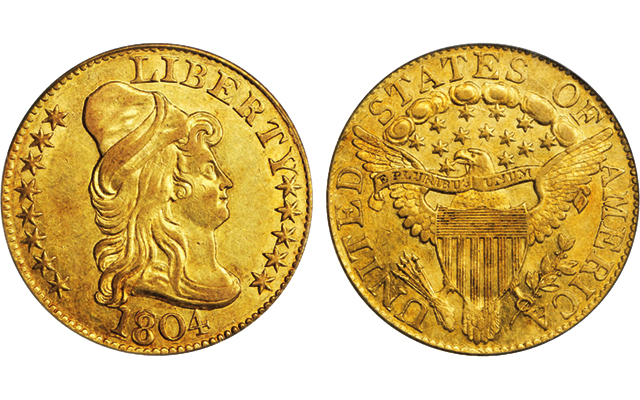 Right on the money

This 1804 Capped Bust, Small 8 Over Large 8 $5 half eagle was graded About Uncirculated 55 by Professional Coin Grading Service with a green Certified Acceptance Corp. sticker. It brought $12,925 when offered Aug. 6, 2014, as part of Stack’s Bowers’ auction of the Dr. James A. Ferrendelli Collection.

The variety is notable for the obvious use of two different “8” punches in the date. The auction firm provided an estimated mintage for the variety of 7,500 to 12,500 coins with just 100 to 150 surviving today.

Doug said that while he’s put the kibosh on many other examples of this coin due to quality issues, after examining this coin in person — described by the auctioneer as having “Pleasing orange-gold hues [with] a dash of copper mixed into the patina of both sides” — he knew that this coin would be perfect for a client who had been searching for a great example of this coin for nearly two years.

Doug adds, “I told him I would gladly bid $10,000 to stock it in my inventory and won it at that bid. The collector texted me about 15 seconds after the lot had closed. When I told him the coin was his, I got back a short but rewarding text saying ‘YESSSS!!!!!!!’ ”