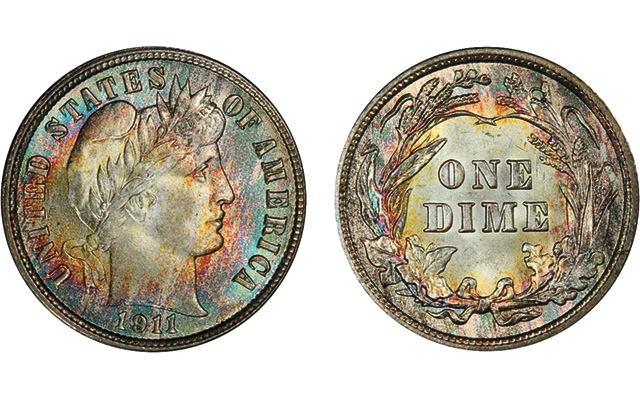 The story: A 1911 Barber dime is not a particularly rare coin, having a large mintage of 18,870,000 pieces. In low grades, it’s a bullion coin that trades for a tiny premium over its silver value.

In high grades, such as this one graded MS-68+, with a Certified Acceptance Corp. sticker, it is a rarity. PCGS has graded no other examples of this date in this grade and none finer. According to Legend, this coin has never been to auction.

Legend calls the colorful coin with shades of blue, green, violet and gold a masterpiece. The description adds, “What a spectacularly toned MS Barber Dime! This borderline MS69’s remarkable state of preservation truly defies logic! The satiny surfaces are ‘as made,’ with not even a microscopic imperfection to be found.”

A coin like this has multiple audiences. Beyond Barber dime aficionados, it may also appeal to people putting together high grade type sets, or those who appreciate toned coins.