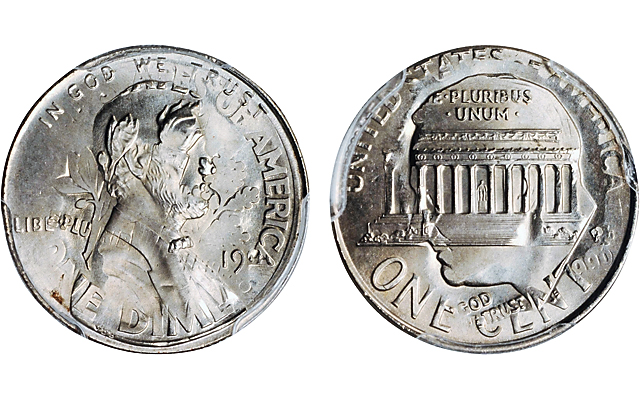 The story: Lincoln cents that are overstruck on Roosevelt dimes have appeared on the market with increasing frequency in the past decade. These errors are part of the larger error category of double denominations.

“This type of error is a two step process,” the cataloger writes in describing how this error occurs. “First off a 1996 Roosevelt dime is normally produced, [but] while travelling back to the counting and weighing area, [the] struck coin becomes trapped in the seam or gate of the tote bin and remains behind when the bin is otherwise emptied. New cent planchets are then poured into the bin and the struck dime becomes dislodged and is struck along with the other Lincoln cents. The dime-cent coin is then distributed normally.”

This 1996 Lincoln cent overstruck on a Roosevelt dime is graded Mint State 66 by Professional Coin Grading Service. In terms of value, these are often more expensive when two clear dates are shown. On this one, all four digits of the date as well as the Philadelphia “P” Mint mark from the Roosevelt dime can be seen.

In contrast, a 1996 Lincoln cent struck on a dime planchet, a mere wrong planchet error rather than a double-denomination error, brought substantially less when it sold for $258.50 at the same auction.