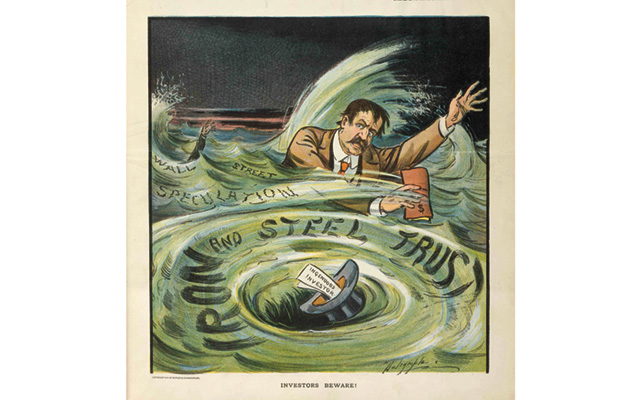 A basic library can give a new (or established) investor confidence and avoid that sinking feeling that comes when one doesn’t have information to make educated decisions. This image is from a 1901 Puck magazine cover.

At first, buying rare coins can be an overwhelming experience.

For someone just entering our hobby, there’s a complete new vocabulary to learn from coin types to grading terms, and everything in between.

Building a basic library can help ease that transition. Robert Shippee recommends it in this month’s cover story and hobby legend Q. David Bowers has put it well in his Coin World column “The Joys of Collecting,” writing in the past, “If you have even a modest numismatic library — say a couple dozen books — you already have an advantage, for 90 percent of the buyers in the marketplace consider only what is written on a holder and its price.”

But where does one start in building a basic library on U.S. coins without spending a small fortune?

I chatted with my friend David Fanning of Kolbe & Fanning Numismatic Booksellers LLC, who said that the obvious start is A Guide Book of United States Coins (the “Red Book”).

He added three more historical books for an essential library: Q. David Bowers’ The History of United States Coinage: As Illustrated by the Garrett Collection, Walter Breen’s Complete Encyclopedia of U.S. and Colonial Coins and Don Taxay’s The U.S. Mint and Coinage: An Illustrated History from 1776 to the Present. Examples of each of these are available for less than $100 each with some searching.

Fanning expanded the list to include Bowers’ Silver Dollars and Trade Dollars of the United States: A Complete Encyclopedia, his United States Gold Coins: An Illustrated History; and the Whitman Encyclopedia of Colonial and Early American Coins.

He also recommended The Early Coins of America, first published in 1875 by Sylvester S. Crosby, and finally, R.W. Julian’s Medals of the United States Mint.

For the 10th addition to a basic library, Fanning suggested periodicals including the American Numismatic Association’s monthly magazine, The Numismatist.

Magazines, including Coin World, provide both research articles and a flavor of what numismatics looks like at any given moment. Over time they provide documentation of a hobby that is always dynamic and ever-changing.