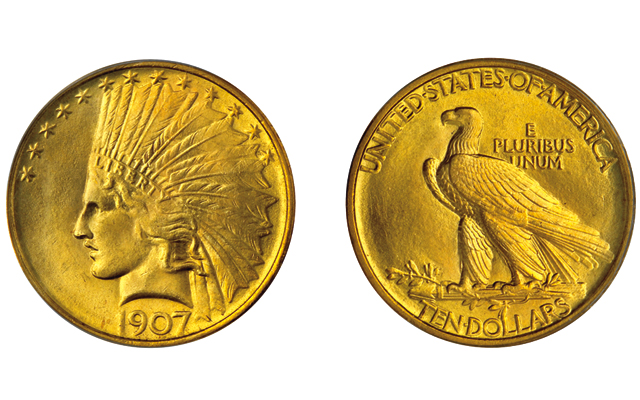 One of Shippee’s final purchases for his type set was this 1907 Indian Head, No Motto gold $10 eagle in MS-62. He paid $43,125 for it and months later sold it for $34,500. He recalls that when he bought it, he needed an example to fill a hole in his set, didn’t consult price guides, and as a result, “I overpaid for this coin, and it was entirely a self-inflicted wound.”

Great collectors aren’t perfect. Shippee was candid in writing, “While the financial results from the sale of the collection described in this book were very satisfying, a number of my early purchases, and even a few of my more recent acquisitions, were not great successes. I paid too much for some common coins. I didn’t stretch enough for some very special coins. I bought some ugly coins. I bought some overgraded and damaged coins. Of course, these coins were not described as ugly, overgraded, and damaged—I was just learning the hard way.”

But, like all people developing a new skill set (and collecting coins requires a new set of skills, beyond an expanded vocabulary), he made fewer mistakes as he progressed. He read the books he purchased. He read numismatic publications like Coin World and met other collectors through local coin clubs. He developed relationships with dealers who were patient, generous with their time and knowledge and essential to his development as a collector.

Shippee is an avid golfer and relates much of his collecting to the lessons learned in golf. As golf commentators are fond of saying, “There is no perfect in golf.” Well, the same can be said for building a rare coin collection as each collector has his or her own war stories of successes and missteps. The key is to learn from them, and to build a team around you of dealers and confidants who can help you in your collecting journey.

Just as it’s sensible in golf to get lessons from a professional and spend hours at the range and putting green rather than just head out to a golf course, tee up a ball and take a swing, the same logic is true with collecting. It would be foolish to Google “rare coins” and buy whatever coins you find. Making alliances with dealers, auction houses and other collectors will help guide a collector in his or her strategy, and Shippee suggests introducing yourself to coin dealers. On dealers, he writes: “They are almost invariably honest—I’ve only been really cheated on a coin purchase once in 50 years, and if I’d bought the right book first, even that incident could have been avoided. Many dealers are friendly and helpful—indeed, most are more than happy to assist collectors in getting started, since a motivated collector is their best customer.” A way to minimize mistakes is to select dealers who are members of the American Numismatic Association and the Professional Numismatists Guild, as both groups require dealers to use binding mediation, which is especially helpful if there’s a dispute.