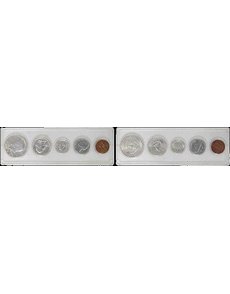 A plastic holder containing five coins from 1964 was packaged privately, not by the U.S. Mint. The set’s value lies primarily in the 90 percent silver content of the dime, quarter dollar and half dollar.

What can you tell me about this coin set? Are they Proofs?

The reader has a privately packaged set, containing a 1964 Kennedy half dollar, 1964 Washington quarter dollar, 1964 Roosevelt dime, 1964-D Jefferson 5-cent coin and 1964-D Lincoln cent. The plastic holder containing the coins has “Whitman” printed on the plastic molding, so this not a set packaged by the U.S. Mint.

The coins in the set aren’t Proof coins, but common 1964 circulation-strike coins. The Kennedy half dollar, Washington quarter dollar and Roosevelt dime are composed of 90 percent silver and were struck at the Philadelphia Mint as they have no Mint mark. The Jefferson 5-cent coin and Lincoln cent were struck at the Denver Mint, possessing D Mint marks. All appear to have some circulation wear and may have been cleaned or polished at some point in the past.

The 5-cent coin and cent are very common. The Denver Mint struck 1.78 billion 5-cent coins and 3.79 billion cents in 1964 and later. Not all coins dated 1964 were struck in 1964; production of 1964-dated cents and 5-cent coins continued until the end of 1965, and the three 1964 silver coins were struck into early 1966, among several steps Congress authorized to combat a nationwide coin shortage.

I came across a coin the same size and color as a U.S. cent. On the front it has the words uncirculated philadelphia around a large letter p. On the back, the words treasury united states mint around the U.S. Mint symbol. Any information on this would be greatly appreciated.

This is not a coin, but is a small medal produced by the U.S. Mint for inclusion in its Uncirculated Mint sets beginning in 1984.

The annual Mint sets from 1984 to 1999 contain one of each circulating coin from the Denver and Philadelphia Mints, but also a Mint mark medal from each facility, struck on a zinc cent planchet double-plated in copper.

As this medal has been removed from its set, it is not known precisely when it was struck or added to a Mint set. None is dated.