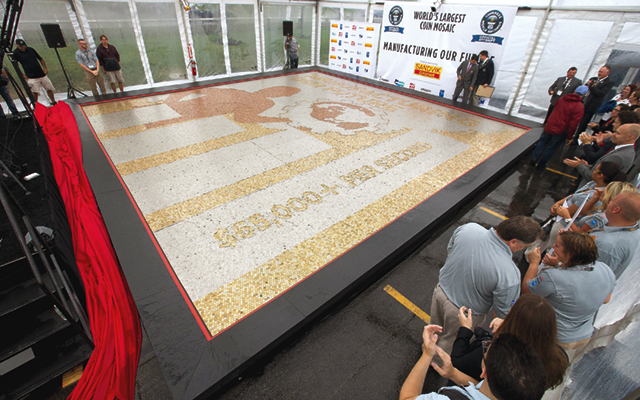 Sandvik Coromant made history Sept. 10, breaking the Guinness World Record for the World's Larges Coin Mosaic during the International Manufacturing Technology Show. The mosaic incorporated more than $65,000 in face value of U.S. coins.

The firm Sandvik Coromant unveiled the mosaic Sept. 10 during the International Manufacturing Technology Show in Chicago.

Sandvik Coromant is the world’s leading supplier of tools, tooling solutions and know-how to the metalworking industry, according to a news release.

Artist Steve Solomon of Upstage Right Productions Inc., in Cherry Hill, N.J., worked with more than 214,000 coins, equal to more than $65,000 face value. Sandvik Coromant partnered with PNC Bank to acquire the coins for the mosaic.

The mosaic’s design symbolized the importance of career development within the manufacturing industry by illustrating a manufacturing worker holding a gear surrounding a globe on which North America was highlighted. A set of rising bar graphs depicted the growth manufacturing has brought to the U.S. economy, while the words “Manufacturing Our Future” headlined the entire image.

Construction on the mosaic began on Sept. 8 in the South Parking Lot A-2 of Soldier Field in Chicago. The mosaic was open for viewing to the public starting Sept. 9, with the official unveiling and confirmation of the Guinness World Record held at 10 a.m. Sept. 10.

The mosaic was deconstructed Sept. 11 and the coins returned to PNC Bank.

During the unveiling ceremony, Eduardo Martin, president of Market Area Americas, Sandvik Coromant, presented a check for $83,456 to The Manufacturing Institute, to aid STEM (Science, Technology, Engineering, and Mathematics) education in the growth of manufacturing careers for future generations.

The dollar sum of the donation includes $65,000 from Sandvik Coromant plus additional monetary donations from event sponsors.