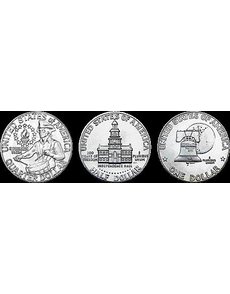 From the vaults of the Philadelphia Mint came these plaster models of two of the 12 finalist designs for the reverse of the 1776-1976 Bicentennial quarter dollar.

In the late 1960s, most coin dealers were busy buying silver coins from the public. In the meantime, the rare coin market, which had reached unprecedented highs in 1964, had crashed in 1965 with a thud.

The bellwether object of investment desire, a bank-wrapped roll of 40 1950-D Jefferson 5-cent coins, which in the late 1950s could have been bought for less than $50 (representing a great profit to holders at the time), zoomed up to $1,200 before stopping in its tracks in 1965. Then the market ran out of new buyers (hard to imagine today in 2012, but history does repeat itself, doesn’t it?).

The slump continued into the early 1970s, when a strong interest in gold coins turned things around and the market was hot once again when it was anticipated that Americans soon would be able hold gold bars and bullion legally, which had not been possible since Franklin D. Roosevelt prohibited the same in 1933.

The coin market woke up. Led by gold coins, prices strengthened and in some instances multiplied. Oops! In 1974, the coin market slumped. Following the old stock market adage, “sell on the news,” I predicted this would happen.

In 1973, a reporter for the Los Angeles Times interviewed more than a dozen coin dealers, seeking their comments. Everyone said that starting in 1974 there would be an unprecedented boom. I was the exception. Later, the reporter called me back and asked me how I knew this might happen. “I have studied economics and the coin market and have learned the lessons of history,” was my reply.

In 1976, the nation celebrated the Bicentennial. A survey of coins in everyday circulation would have shown the following. Lincoln cents were nearly all with the Lincoln Memorial reverse; “Wheaties” were hardly ever seen and were worth two or three cents each. Jefferson 5-cent coins were the same as ever, except that most were dated since 1950, and no silver-content wartime pieces were to be found. Dimes, quarter dollars and half dollars were all of copper-nickel clad metal — silver had disappeared. Eisenhower dollars in copper-nickel clad, introduced in 1971, were never seen, or at least were not seen by me, except during a trip to Las Vegas where they were in common use on the gaming tables.

The 1776-1976 Bicentennial coinage was a numismatic nonevent. The market remained in a slump. Proof set orders fell below expectations, and except for the quarter design with its drummer boy, most collectors found the new higher-denomination designs to be ugly.