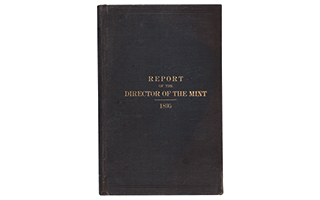 Annual reports to Congress by the director of the United States Mint tend to be slim volumes of dry tables, boring even to coin collectors. Every now and then, the report will feature a brief mention of a new coin — like the Washington quarter dollar in 1932 — and possibly a photo. Thats about it.

Except in 1895. That year, Mint Director Robert E. Preston produced one of the longest — 450-plus pages — and most interesting Mint reports ever printed. And its as close to owning a circulation strike 1895 Morgan dollar as any of us will ever get.

The coin is a fabled and unobtainable rarity. None are known to have survived. The book, though, is widely available for $25 to $50.

The 1895 dollars existence is known to collectors chiefly through a one-line mention in a chart on page 208 of Prestons report.

In July 1895, Preston reports, the Philadelphia Mint produced 12,000 dollars from 10,312 ounces of silver that the Mint bought for $8,400. The Mints seigniorage, or profit from minting the coins, was about 30 cents each.

That profit, though, was illusory. Congress required the Mint to buy millions of dollars worth of silver each month and pay for it with paper money that was easily convertible to gold. Gold, at that time, was fairly stable in value. Silver, though, was plunging by the day. The practice drew down the nations gold reserves to the point that the United States nearly defaulted on its international payment obligations. While everyone wanted gold coins, nobody wanted the hundreds of millions of silver dollars. The silver was coined, as required by Congress, and promptly placed in storage.

Nobody knows what happened to the 12,000 1895 dollars, and some additional evidence supports the fact that the coins were struck. Its possible they were among the 270 million silver dollars that were converted to bars and shipped to India in 1918 to help Great Britain in World War I. The Mint didnt keep track of the melted dates.

The most interesting part of the 1895 report, though, is a 73-page history of the U.S. monetary system that ends with a stinging criticism of bimetallism. The last generation, Preston complained, had grown up with "misconceptions and delusions" about the nature of money. Placing a government stamp on 50 cents worth of silver, he complained, doesnt really make it worth $1.

"All high civilized countries and all great commercial nations, with the exception of the United States, have, for reasons of this nature, pronounced in favor of the gold standard," Preston wrote.