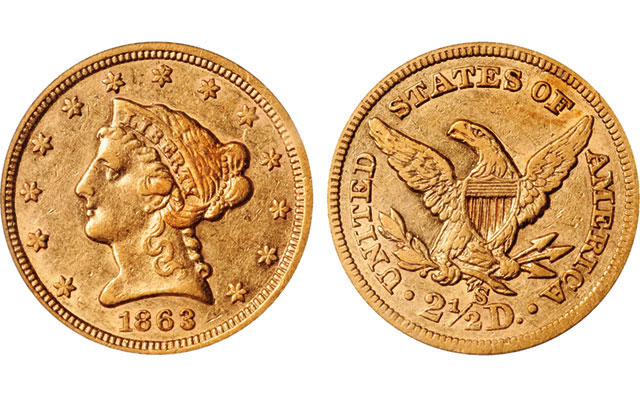 Most San Francisco Mint gold and silver coins of the 1860s are well worn when encountered today, such as this 1863-S Coronet gold $2.50 quarter eagle. Why?

This week I take a wider view on American numismatics after the Civil War in the hope that you will find the monetary situation of this period to be interesting.

You will also learn why, in collections today, silver and gold coins minted at the San Francisco Mint are on average much more worn than those made at the Philadelphia Mint.

This curious situation started in the waning days of December in 1861. The Civil War, which began on April 15 of that year, was viewed by Northerners as being an easy win. After all, the North was heavily industrialized, while the South was primarily agricultural — with the raising of cotton, tobacco, corn, and rice. President Abraham Lincoln called for citizens to enlist in the Army for 90 days — long enough to end the war. That didn’t happen.

The first major encounter was the Battle of Bull Run in July. Surprise! The Confederates won. By December, it was not certain which side would be victorious, and gold coins began to be hoarded.

In February 1862, with the Treasury Department short of gold and silver, Congress authorized legal tender notes exchangeable for other paper, but not for precious-metal coins. The first notes were issued in March. The public became more concerned, and by late spring no silver coins were in circulation. Then in the second week of July, copper-nickel cents disappeared. Money from then until well into 1863 consisted of small paper notes, tokens, and the like.

In 1864, cents reappeared in circulation in quantity, and the new 2-cent coin was introduced. In 1865, the copper-nickel 3-cent piece made its debut. The Civil War ended in April of that year.

It was widely expected that hoarded silver and gold coins would reappear, and commerce would become normal. This did not happen, as the public felt that legal tender notes and national bank notes held uncertain real value. It took until after April 1876 for silver coins to again be seen in circulation, and until January 1878 for gold coins to be on a par with paper money.

In the summer of 1866 a new coin, the copper-nickel 5-cent piece, was introduced. This might seem redundant with the silver half dime, but is more understandable when you consider that no half dimes were in circulation. Silver and gold coins continued to be struck at the Philadelphia Mint, but they were available only at a stiff premium in terms of paper money and, as said, did not go into circulation. They traded at bullion value. When the steamship SS Republic steamed out of New York City and headed to New Orleans in October 1865, it carried with it a large quantity of silver and gold coins to be used at the destination. The ship sank off the coast of Georgia in a hurricane on Oct. 18. In 2003, the wreck and its coins were found by Odyssey Marine Exploration Inc. If the ship had taken paper money, it would have been nearly impossible to spend in New Orleans.

Meanwhile, on the Pacific Coast in the 1850s and 1860s silver and gold coins were plentiful in commerce and traded at face value! Over a period of time they became worn, including those of the San Francisco Mint. The California Legislature banned the use of paper money in 1850. Anyone bringing such bills from the East found that no one would accept them except at very deep discounts from face value.

Today, if you study the average grades of, say, gold $2.50 quarter eagles and $5 half eagles of the 1850s and 1860s you will find that nearly all coined at the Philadelphia Mint are in grades such as About Uncirculated and lower ranges of Mint State, while San Francisco Mint quarter eagles and half eagles are often Very Fine or Extremely Fine. Now you know why.

You also know why we have copper-nickel 5-cent coins.