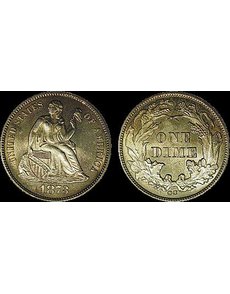 Successful coin funds could place greater demand on great rarities, like the unique 1873-CC Seated Liberty, No Arrows dime. Its last auction appearance was in 2004 where it realized $891,250.

Rare coin investment funds have been around for decades, and on Oct. 31, the formation of four new funds to be managed by Certified Assets Management International LLC, was announced. One of the funds is expected to acquire up to $250 million in rare coins.

For many, what first comes to mind regarding “coin funds” are two rare coin funds in which the Ohio Bureau of Workers’ Compensation invested a total of $50 million between 1998 and 2005.

Although the funds returned more than $10 million in profit to the state, their success was tainted when Ohio coin dealer Thomas W. Noe was found guilty of various charges including theft and money laundering related to his management of the two funds.

The concept of collectible objects forming the basis of an investment fund is not new. In the past decade several fine art funds have emerged. Philip Hoffman, CEO of The Fine Art Fund Group LTD, summarized the appeal of art-based funds, stating, “The value of a [painting by] Canaletto will never go down to zero, it will never do an Enron or a Marconi.”

The Fine Art Fund Group fund has created relationships with several major banks including the Emirates National Bank of Dubai. Gary Dugan, chief investment officer of the bank, has stated: “We’re not doing interior decoration. It’s not an aesthetic investment but a financial investment.”

Investors are increasingly turning to alternative asset classes like fine art and rare coins as stores of wealth, although the case for paintings as an investment differs somewhat from coins, in that thousands of art museums around the world acquire and serve as permanent depositories of art, creating an ever-shrinking supply of Old Master through Modern paintings.

As some paintings can trade for up to $150 million privately, many have wondered whether the presence of institutional investors is needed for individual rare coins to break the $10 million barrier.

Whether CAMI will be able to attract investors to the funds is yet to be determined, as is the impact that an additional major buyer will have on the coin market. If the funds are done right, it could add legitimacy to rare coins as an alternative asset class worthy of high-end investor dollars. ¦