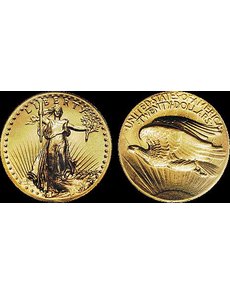 Many consider sculptor Augustus Saint-Gaudens designs for the gold $20 double eagle among the most beautiful among U.S. coins. Several different designs contend for the ugliest U.S. coin.

Everybody has his favorite candidate for prettiest U.S. coin, with the Saint-Gaudens gold $20 double eagle often coming in at the top.

When collectors start talking about the ugliest coin, the knee-jerk reaction is the Anthony dollar of 1979 to 1981 and 1999, but I think that selection is unfair.

Many reasons exist to hate the coin, ranging from its awkward size to the fact that Ms. Anthony was no beauty. But U.S. Mint Chief Engraver Frank Gasparro did a great job with what he had to work with.

The U.S. Mint has issued worse-looking coins, starting with all of the Presidential dollars.

Presidential dollars just don’t look like coins to me. They look like those cheesy presidential medals that gas stations used to give away in the days when a dollar would buy enough fuel for a date night.

The presidential portraits on the coins, limited to very shallow relief, are no more than workmanlike. The common reverse, especially with the denomination stated as “$1” instead of the more stately “One Dollar,” looks like a casino chip. And any coin that doesn’t have a date on the obverse just isn’t a coin to me at all.

The “spaghetti hair” Washington used as an obverse of the State quarter dollar series, ranks way up there on the ugly coin list, too. Trying to comb the mats and moths out of Washington’s hair, Mint engravers took a dental drill to the man’s scalp and drew tons of wriggly lines that look more like pasta than hair. To me the hair resembles a maze, and I keep trying to trace my way out.

The Lincoln, Shield cent comes in next. The Mint took a shield, for no good reason, and placed the denomination on a scroll in front of it. Scrolls are used to proclaim things like “In God We Trust” or “E Pluribus Unum,” but should not to do something as pedestrian as give the denomination on a cent.

With all the country’s great history, this insipid Shield design is worse than ugly. It doesn’t say anything. It’s what you put on a coin when you have no ideas at all and don’t want to leave it blank.

It was especially disappointing coming on the heels of the wonderfully detailed reverses on the 2009 Lincoln Bicentennial coins.

The Barber dime, quarter dollar and half dollar come in next, with the obverse design getting uglier the larger it gets. I know it’s supposed to be Liberty wearing a freedom cap and laurel wreath. To me, she looks like a he, and the liberty cap looks like a baker’s hat. I think the part of him/her below the head, the part you can’t see, is a man throwing pizza dough.

These are my picks. What are yours? Send an email to me at gtebben@columbus.rr.com.