Coin design plasters offer a look at what might have been 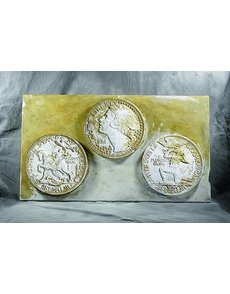 Three plaster models by Chester Beach for the 1921 Peace dollar competition sold at auction for nearly $20,000 in 2009.

The announcement that plaster models made by Hermon A. MacNeil during his design process for the Standing Liberty quarter dollar will appear at auction in August set my imagination wandering.

What numismatic treasures still lurk in attics and storerooms?

MacNeil’s design as evidenced by the plasters is clearly familiar, yet strikingly different in the details. In the plasters, Liberty has a belly button and long, flowing hair. There are two grumpy dolphins and an eagle on the shield that did not make it into the final design. Artist models like this are reminders that seeing a glimpse of the process of a coin’s design can help one better understand the finished product.

Amazingly, these plasters were almost disposed of at one time. After MacNeil died, the contents of his studio were reportedly hauled to the dump and some items were saved by a neighbor. While to today’s numismatists it sounds impossible that historically important — and economically valuable — items would be discarded so carelessly, many artist studios of the past century have suffered undignified fates.

In MacNeil’s time, sculptors rarely preserved their process work — work that supported the creation of a finished product for a commissioned piece. The competition to design new coins in 1916 where the U.S. Mint invited outside artists was no exception. Researcher Roger Burdette wrote in 2006, “Time has not been kind to either the visual or written record of the 1916 design competition.”

Some of these numismatic treasures surely remain waiting to be discovered — in bookstores, garage sales, and estate sales.

The rewards for finding these are great, as they are expensive today. In 2009 three plaster models by Chester Beach for the 1921 Peace dollar competition (he lost) sold at auction for nearly $20,000.

The coin collector premium for the numismatic work of sculptors is substantial. For comparison, more typical plasters by Beach of profile portraits from the 1920s and 1930s sold at auction in 2009 at the $100 to $200 level. The Beach studio was left relatively untouched after his death and its treasures were revealed only after the Beach family home was put on the market several years ago.

One hopes that the rapidly increasing market for objects of this type will bring more out of the woodwork, to be made available to researchers and collectors.