Coin collectors in 1859 were treated to three auctions 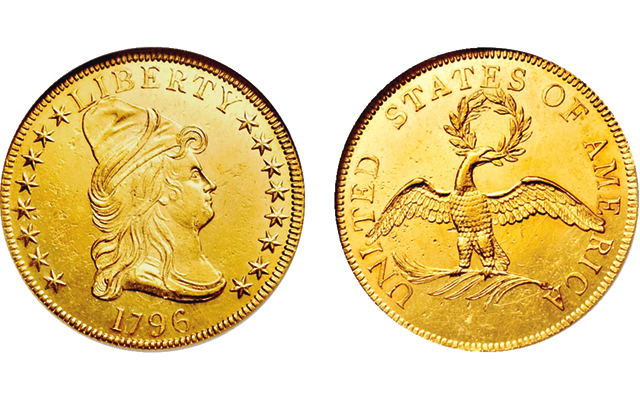 At the Bogert sale a high-grade 1796 Capped Bust gold $10 eagle sold for $12.50. Today such a coin could bring a six-figure price if sold at auction.

In 1859 (not in 1858 as I mistakenly stated last week) teenaged Augustus B. Sage broke precedent and cataloged three auctions featuring rare coins. Before then, coin sales were sporadic, sometimes with one in a given year, most often with none. Sage’s first was of the Bogert Collection held from Feb. 28 to March 5, 1859.

The catalog, 93 pages plus covers, told nothing about Bogert, but today we know that he was a friend and business associate of Sage. In all, the auction offered 1,653 numbered lots, some of which included multiple items.

“Catalogued by AUG. B. SAGE” noted the cover of the Catalogue of the Valuable and Extensive Collection [of] Coins, Medals & Numismatic Works, the Property of Henry Bogert, Esq. Which will be sold at public auction, by Messrs. Bangs, Merwin & Co. at their rooms, No. 13 Park Row, on February 28th, 1859, and the five following days.

Sage in his wildest dreams could not have predicted that his catalogs and, indeed, any and all other information about him (he was the prime founder of the American Numismatic Society, a prolific issuer of tokens, and conducted a retail coin business in New York), would be eagerly sought by historians, including members of the Numismatic Bibliomania Society.

The catalog had no terms of sale, no guarantees, and no information for mail bidders. No introductory sentence, let alone a paragraph or page, described the desirability of the offering about to take place. In 1859 no published grading standards or price guides were available. Careful study was required to bid at auction and build a fine collection. Of course, this was part of the appeal of the hobby — the thrill of the chase.

Each day during the sale week bidders inspected the coins to be offered — no doubt arranged on wooden tables or perhaps along the long wooden bar or counter at the front of the room. Late each afternoon and continuing into the evening, under the illumination of gas lamps, the sale took place. At the front of the room, behind the wooden bar, the auctioneer stood, catalog in hand, as he called the sale. Behind him were one or two recording clerks at a desk or podium, and flanking him were several clerks and attendants. The latter kept track of the coins, books, and other items as they were sold and, upon request, would show a lot to a bidder who wanted a second look.

By six days later the attendees had experienced much camaraderie, had talked of many things, and had captured many treasures. When all was said and done, the sale brought $2,198.47, of which books comprised $284.86 of the total. The sale if held today would cross the $1 million mark!